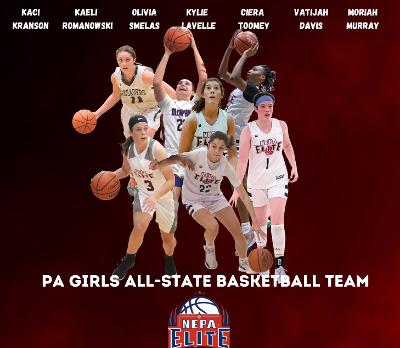 Six members of last season’s Hoop Group Showcase League championship team and a member of this year’s team from the AAU club out of Riverfront Sports in Scranton were recognized for their performances as high school players during the 2021-22 season.

Moriah Murray and Ciera Toomey in Class 4A; Kylie Lavelle in 3A; and Kaci Kranson in 2A were all repeat first-team choices. Vatijah Davis, in Class 6A, and Kaeli Romanowski, in Class 3A, were named to the second team. Olivia Smelas was a third-teamer in Class 4A.

Davis is on this year’s team. The other were members of last season’s Hoop Group Showcase League championship team.

Each of the players honored led their teams to championships.

Smelas helped Jim Thorpe to Schuylkill League Division 1 and overall championships as well as the District 11 Class 4A title.

Dunmore won Lackawanna League Division 3 and District 2 Class 4A titles behind the efforts of Murray and Toomey.

Lavelle led Riverside and Kranson led Holy Cross to Class 3A and 2A district titles.

Jim Thorpe reached the state semifinals while Dunmore and Riverside made the quarterfinals, Western Wayne advanced to the second round and Holy Cross also played in the state tournament.

Dunmore lost once in each of Murray’s first three seasons and twice this season for a 95-5 record during her career. The senior guard scored 1,595 career points with the help of 17.3 points per game this season when she also averaged 6.1 assists, 6.0 rebounds and 3.1 steals.

Murray not only has the unique accomplishment of being the only four-time, first-team, all-stater in Pennsylvania in the Class of 2022, but she also has had a teammate join her on the first team in three of those seasons.

Victoria Toomey, Ciera’s older sister, joined Murray in 2019 and Ciera Toomey has been the other first-teamer the last two seasons.

“Playing with Ciera has just been amazing,” said Murray, who set Dunmore records for 3-pointers in a season (87) and career (279). “I really think we grew from each other. We both play different positions, but she also is kind of a point (guard), so the way I pass to her is also the way she passes to me.

“I think it’s also cool that my freshman year Victoria got first-team all-state. Being able to get first-team, all-state with both of them really means a lot and I think that’s a memory I’m never going to forget.”

Toomey, a junior who recently verbally committed to the University of North Carolina, expressed similar thoughts.

“We’ve been teammates for so long in just about all aspects of basketball we’ve played,” said Ciera Toomey, who shot 67 percent from the floor while averaging 18.5 points, 7.0 rebounds and 1.9 blocked shots. “Just to be able to receive it side-by-side is something cool and refreshing that we have at the end of the season.”

With NEPA Elite last summer, Toomey was the Hoop Group Showcase League Most Valuable Player while Murray was a first-team all-star and Lavelle was a second-team all-star.

Like Murray, Lavelle is headed to Drexel University to continue her career.

Lavelle led Riverside to its deepest state playoff run since 1992 and finished second on the school’s career scoring list with 1,910 points.

“Throughout my high school career, I couldn’t have done it without my teammates and coaches,” Lavelle said. “We played every game hard.”

The lineup changed significantly this season with heavy graduation losses, but Lavelle made sure the Lady Vikes kept climbing.

“We’ve been talking about our senior year since seventh and eighth grade,” said Lavelle, who averaged 25.1 points, 10.0 rebounds and 2.8 steals. “We always knew this would be the year we would go as far as probably could. We did that, so it kind of shows how our chemistry worked throughout the years.”

Kranson became the Holy Cross career scoring leader, boys or girls, with 1,876 points. She led all District 2 players with 27.0 points per game this season, including a Mohegan Sun Arena at Casey Plaza record of 33 in the district final.

“This means a lot to me,” Kranson said of the repeat all-state status, matching a feat she also accomplished on the softball field. “I’ve been working so hard with all my coaches, in the summer in AAU with Kevin Clark and with my high school coach, Barry Fitzgerald, working in the winter. They helped me achieve this goal, which is something I always wanted when I was younger.”

Romanowski set Western Wayne’s scoring record of 1,569, capping a career in which she was a three-time Lackawanna Division 2 Player of the Year choice by NEPABasketball.com.

“For me to be able to get this award means everything for me and my teammates,” said Romanowski, an Elizabethtown commit who used her quickness and defensive intensity to average 7.5 steals, along with 5.3 assists and 5.0 rebounds per game. “Without one another, we wouldn’t have been able to accomplish anything.”

Davis, a new addition to the NEPA Elite program, was the EPC Player of the Year choice by conference coaches.

The 5-foot-10 junior forward averaged 24.1 points, 10.9 rebounds and 2.7 steals per game while shooting 49 percent from the floor. Davis tied a school record with 38 points against Stroudsburg and also scored 36 against Pleasant Valley while helping the Panthers go 17-4 in the regular season.

In her opening weekend with NEPA Elite, Davis had a 24-point and a 20-rebound game.

“I think we’re going to be able to play a lot off of her,” coach Clark said.

Smelas averaged 11.2 points and 10.1 rebounds to finish her career with 1,252 points and become the first Jim Thorpe player ever with 1,000 career rebounds. The Kutztown University commit had a series of clutch performances in the playoffs, including in the second half of the state quarterfinal game against Dunmore.

“We’ve been playing together forever,” Smelas, who was part of a senior class that won 96 games and reached the state semifinals for the first time, said during the postseason. “Our senior year, we’re putting it all on the line.”