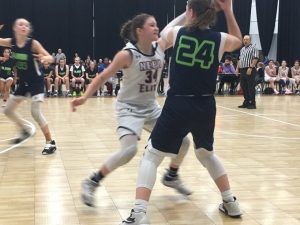 MANHEIM – Finley Bittenbender and Zya Small led the way when a pair of NEPA Elite girls teams finished up the Select Events Basketball Live! at the Nook with victories Sunday.

Small followed up a triple-double Saturday by making her first seven shots in NEPA Elite Clark 13U’s 46-21 rout of I-90 Elite to finish as the 2007 Division Pool B winner with a 5-0 record.

A recap of Sunday’s games:

Bittenbender scored 21 points with the help of five of the team’s eight 3-pointers in the 45-37 win over the Connecticut Starters.

NEPA Elite took the lead with a 16-2 second quarter, then fought off a Connecticut comeback by hitting four of its 3-pointers in the third quarter.

Bittenbender had five points in the first quarter, but the Starters led, 8-7.

Ella Wilson had five points, Sophia Talutto went 4-for-6 from the line, Elizabeth Viglone also had four points and Bittenbender hit another 3-pointer during the second quarter to put NEPA Elite up 23-10 at halftime.

“When we pass, we get more open shots,” Bittenbender said. “I think we were unselfish and dished out of the double teams.

“It all came together and we just enjoyed the game more.”

NEPA Elite built the game’s biggest lead at 37-20 late in the third quarter.

Bittenbender hit two 3-pointers and assisted on two baskets; Viglone had three steals and made a 3-pointer; and Talutto had two assists along with a 3-pointer during the third quarter.

“I knew I missed a couple in the first quarter, so I wanted to knock some down,” said Bittenbender, who hit at least once from beyond the arc in every quarter. “I just focused more when I released the ball and they went in.”

Connecticut rallied with the last five points of the third quarter and the first four of the fourth to close within, 37-29.

Bittenbender then scored five straight points to open the lead back to 42-29 with 3:05 left.

NEPA Elite finished 3-2 with a pair of two-point losses, one in overtime, Friday night. The team placed second in the 2024 Division Pool E, beating two other 3-2 teams on a tiebreaker and handing pool winner Fencor its only loss in five games.

Small finished a well-rounded game with 17 points, 9 rebounds, 3 assists, 3 steals and 3 blocked shots when NEPA Elite completed its unbeaten run through the 2027 Division Pool B with the 46-21 victory over I-90 Elite.

Small is from Scranton; Castellani is from Valley View; and Clementoni and McHugh are both from North Pocono.

NEPA Elite is unbeaten through two events. After winning the first three games at Spooky Nook Sports by seven points or less, it finished up with consecutive Mercy Rule victories.

The Boston Lady Rivals 17U 3SSB team took advantage of fastbreaks and second chances off rebounds to shoot 58 percent over the final three quarters of a 2023 Division Pool B game, beating NEPA Elite Clark 17U, 85-52.

Kiyomi McMiller, a nationally ranked prospect from Trinity Collegiate High School in Darlington, S.C., completed her first weekend with NEPA Elite by putting up 37 points and pulling down 12 rebounds in the loss.

NEPA Elite’s best quarter was the third when it scored 20 points with McMiller, Daniella Ranieli and Cadie Lewis all hitting 3-pointers and five players contributing to the scoring.

Ranieli is from Pittston Area. Lewis is from Dunmore.

NEPA Elite was one of three teams to finish 2-3 in the pool.

Bella Dennebaum was Scranton Prep was the team’s top scorer and rebounder with 11 points and 6 rebounds.

NEPA Elite went 2-3 in the 2025 Division Pool A, losing to the three teams that tied for the best record in the pool at 4-1.