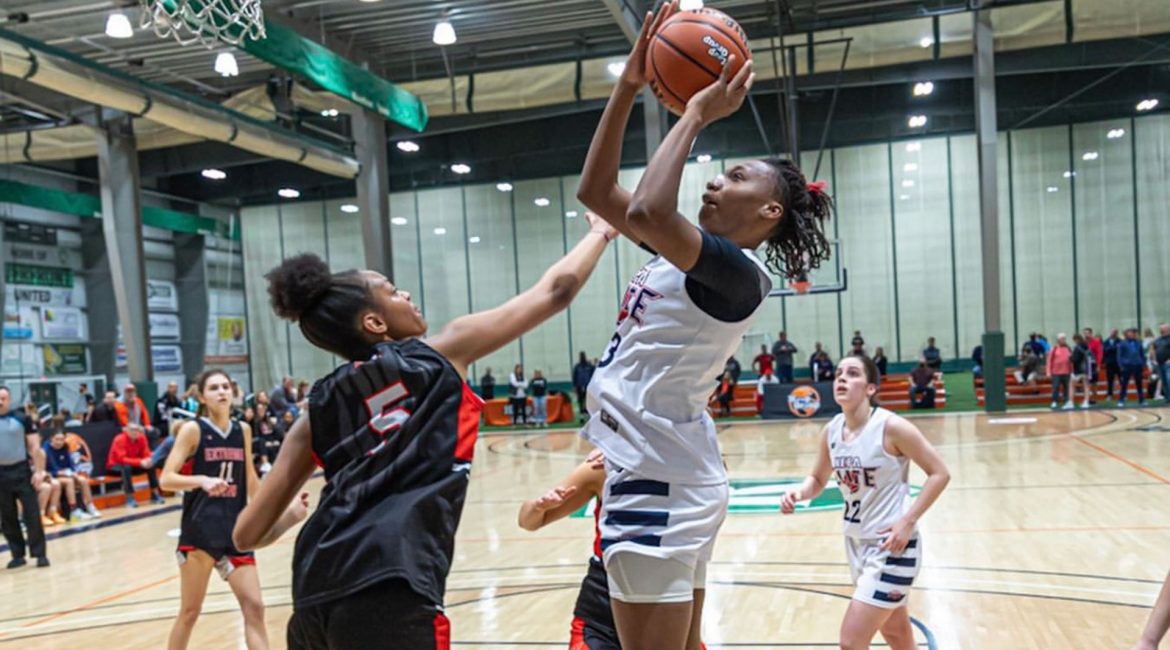 SCRANTON – Periodic updates from Saturday’s action in the Hoop Group PA Warm-Up girls event at Riverfront Sports and the University of Scranton:

NEPA Elite teams won their final two games of the night, playing simultaneously in the last session at Riverfront Sports, to even the first day’s record at 5-5.

Minutes before the NEPA Elite 13U Clark girls finished their second rout in a 2-0 day at The Hoop Group PA Warm-Up, NEPA Elite 15U Rini pulled out a close game to finish its day at 1-1.

Madeline Walsh from Abington Heights hit the game-winning shot for the Rini team in a 44-42 victory over New York Extreme Hoops 15U-Red in a meeting of Hoop Group Showcase League teams in the 15U Pool A.

The Rini team looked ready to break away with six straight points for a 42-36 lead, only to have Extreme Hoops score six straight in 19 seconds on a 3-pointer and a three-point play to force a 42-42 tie.

There were only two points scored in the final 3:53, none by Extreme Hoops.

Walsh took an in-bounds pass on the right wing and hit a runner from about five feet while moving right to left across the lane with 2:15 remaining.

Although it only took two to tie and force overtime, the Rini defense forced Extreme Hoops into a series of failed 3-point attempts.

Ella Smith from Wallenpaupack scored a team-high 11 points in the win. Maggie O’Shea from Scranton and Maggie Coleman from Abington Heights added eight points each.

After scoring the first 21 points of the opener, they gave up an early basket for a 2-2 tie, but then ran out to a 35-6 advantage with five minutes left in the half.

The NEPA Elite 16U Butler team finished the first day 1-1 in The Hoop Group PA Warm-Up.

Jenna Hillebrand from the NEPA Elite 15U Rini team took on some extra duties with two Butler players unavailable because of school functions. Hillebrand, a Scranton Prep freshman, made the most of the extra game, scoring a team-high 17 points.

Gabby Marsola from Wyoming Valley West had 10 points and 8 rebounds.

Return to this blog for additional coverage as action continues.

SCRANTON – The NEPA Elite AAU club operated teams from 15U through 17U for its first two seasons.

The NEPA Flames 6th grade team was so dominant throughout the spring and summer of 2021 that it became the first team younger than the 15U level to compete under the name of NEPA Elite when it won the Northeast Regional of The Ladies Ball in the fall.

Now competing as the NEPA Elite 13U Clark team, that promising younger group began its first full season as an NEPA Elite team Saturday afternoon with an impressive performance in a 61-17 rout of New Jersey Shoreshots 2027-Chambers/Bowler in a 13U Pool A game.

The game was decided early.

NEPA Elite ran off the game’s first 21 points while holding Shoreshots scoreless for 6:12.

Ella Clementoni from North Pocono had a pair of three-point plays while scoring eight points in the 21-0 start.

Six players scored during the opening run, including consecutive layups in transition by Cora Castellani from Valley View.

Return to this blog for additional coverage as the day progresses.

SCRANTON – NEPA Elite 16U teams split in a pair of afternoon games in the Hoop Group’s PA Warmup.

The NEPA Elite 16U Butler team opened its season with a 38-37 victory over LGB Select 2024 in a 16U Pool C game at the University of Scranton.

The Macciocco team rallied in the second half before the Lady Runnin’ Rebels pulled back in front late.

Finley Bittenbender scored 15 points while Sophia Talutto and Kennedy Bittenbender had 13 each for the Macciocco team. The Bittenbender twins are from Scranton while Talutto is from Dunmore.

Return to this blog for additional coverage as the day progresses.

The first win of the season for the program came from the Clark 17U girls team, which split its two games the 17U Pool A.

NEPA Elite Clark has won the 17U title in the first two years of The Hoop Group Girls Showcase League, but it has an entirely new lineup as it enters the season.

Some of the players on this year’s rosters are moving up from younger division NEPA Elite teams or from other AAU teams out of Riverfront Sports.

The Clark team leader on the first day, however, was a player who is new to the program as a whole.

Vatijah Davis, a 5-foot-10, Class of 2023 forward from Pocono Mountain West, led the team in scoring in each of the first two games and was also the leading rebounder on the day.

NEPA Elite played from behind in both games, but moved into the lead briefly in the second half against New York Extreme and to stay against In the Zone.

After Davis scored the first basket against New York, the Extreme led from a little more than a minute into the game until Davis drove down the middle for a 31-30 lead with 7:08 left in the game. A Davis runner in the lane created the biggest NEPA Elite lead at 37-34 with 3:52 left, but New York scored 10 of the game’s final 14 points.

Emily Romanowski, a sophomore from Western Wayne, grabbed a team-high 10 rebounds in the opener while also leading with two steals.

NEPA Elite overcame an offensive drought that created a 15-5 hole against In the Zone. It managed just one field goal in the first 10:02, going 7:42 without a point and 9:27 without a basket.

Davis scored 13 points in less than 4½ minutes, then, after Romanowski made a 3-pointer from the corner, a long outlet pass by Davis set up Wyoming Valley West sophomore Mackenzie Perluke for a layup and a 25-25, halftime tie.

Romanowski and Davis had four points each in a 10-0 run to a 37-29 lead. Booth started the run with a drive that wiped out the last In the Zone and Romanowski followed with another to put NEPA Elite ahead.

In the Zone answered with a 13-4 run to its last lead, but Davis hit a 3-pointer with 5:32 left to put NEPA Elite ahead and start an eight-point streak to a 49-42 lead. Davis had five points and Booth three in the run.

Booth made six of her last seven free throws to help secure the win.

Romanowski, who went 3-for-5 from the floor and 4-for-4 from the line while making her only 3-point attempt, joined Booth with 11 points each.

Ranieli shared the steals lead of three with Romanowski and led the team with two assists. 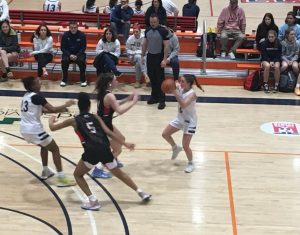