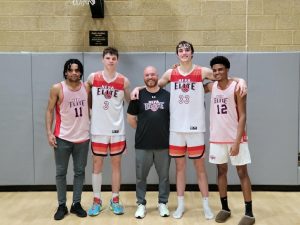 Javon Adams scored 29 points and Chance Westry added 26 Monday night when Raw Sports brought an end to NEPA Elite’s run in the 60th annual Albert C. Donofrio High School Classic with an 83-61 victory in a semifinal game at the Community Center in the Fellowship House in Conshohocken.

NEPA Elite, in its debut in the tournament, won its first three games to get down to the final four of the 26-team, single-elimination event.

Ethan Meuser, a Wyoming Seminary graduate who spent this past season at The Hill School in Pottstown, scored 15 points. Justice Shoats, a Holy Redeemer senior, and Ben Chilson, a Tunkhannock junior, added 11 points each.

The Donofrio Classic is a non-AAU tournament, so the NEPA Elite entry in the event is a combination of current and former players from the Coyle 17U team out of Riverfront Sports-based club.

Meuser, Shoats and Scranton seniors Jason Shields and Arvel Chandler returned to play with the team one last time. It was a 3-pointer by Shields, from just inside midcourt, at the regulation buzzer in the quarterfinals that extended the team’s tournament life and allowed it to advance with an overtime victory.

Meuser had nine points in each half.

NEPA Elite kept the deficit in single digits until the final 10 minutes when the 6-foot-9 Adams and Auburn commit Westry helped Raw Sports pull away.