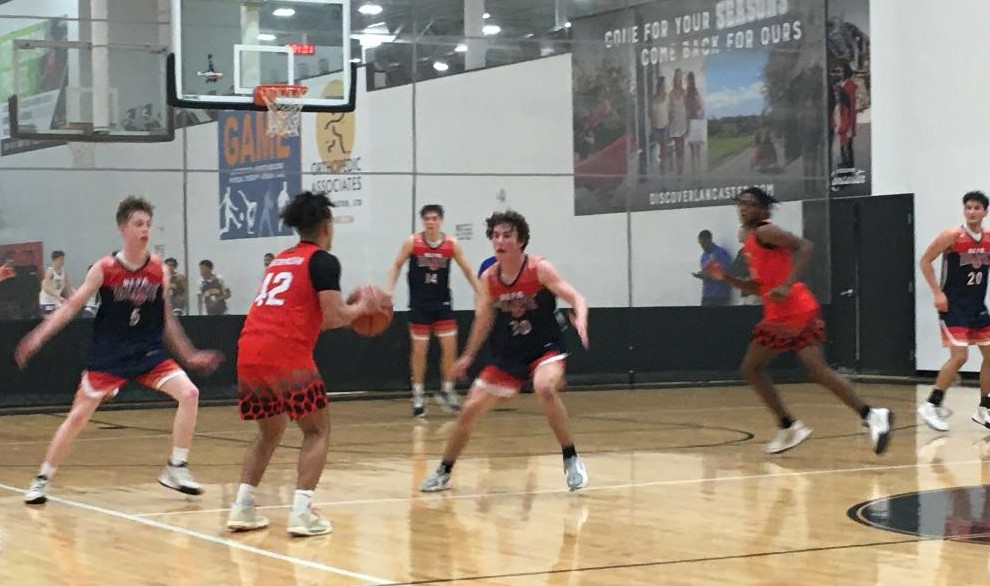 MANHEIM – The Boo Williams Selects rallied into a tie three times in the second half of their HGSL Consolation bracket game, but the NEPA Elite Coyle 17U team fought them off each time on the way to a 49-47 victory.

“We just executed on offense and continued to play good defense like we have all weekend,” said Ben Chilson, who scored a team-high 13 points and grabbed 5 rebounds. “It was just a good win all around.”

“If you look at our scores this weekend, they’ve been very low, partly because of the way we’ve locked people down,” coach Coyle said. “Three coaches came up to me after our games and said it was the best defense they saw. They were really impressed.”

The Coyle team turned in its most complete performance of the opening weekend when the offense got rolling in the second half.

“I think we’ve down a great job defensively, but at the same time, offensively, I think our maturity shows a little bit,” Coyle said. “We’re quick to make a decision sometimes. When, we feel pressure, our decision is to go right to the basket and sometimes we take a bad shot.

“I thought against Boo Williams, we adjusted and learned. We were able to handle their pressure, make good decisions and get wide-open shots.”

When NEPA Elite did that, it also converted those shots.

Chilson scored 11 points in the first 7:35 of the second half to build the lead as high as 10.

“This team is so young and so new,” Coyle said. “Ben Chilson is the only one I have from last year.

“ … They’re all very capable on their high school teams so, when that pressure comes, they’re the ones taking that shot. Now, they have to learn to play with each other.”

Chilson hit consecutive 3-pointers from the opposite corners as part of a 10-0 run to the game’s biggest lead at 27-17.

“Our problem on offense was not executing and running through our plays all the way,” Chilson said. “This game, we did a better job of moving the ball around and creating more open shots that are more likely to go in.”

Danny Nemitz carried the offense through the stretch run, scoring all eight of his points in a span of 2:22 from the 4:12 mark until 1:50 remained in the game. He helped fight off the Selects the last two times they got within one, draining a 3-pointer, then scoring five straight points with the help of another 3-pointer.

“It all starts on the defensive end, then it comes down to executing our sets, which I thought we did a good job of today,” said Nemitz, who did much of the ballhandling through a one-possession game late, forcing Boo Williams to foul.

Nemitz, Chilson and Ryan Nealon each hit a pair of 3-pointers, combining to go 6-for-11 from long distance in the second half.

Defense dominated after the Selects took a 9-4 lead with 12:28 left in the half.

NEPA Elite did not allow a point for more than five minutes while moving in front. With the defense giving up just eight points for a stretch of more than 16½ minutes, Chilson’s fast start to the second half was able to briefly create the double-figures lead.

NEPA Elite was ahead or tied from the midway point in the first half on.

“Once we stopped giving up the dribble ball penetration in the middle, it was really hard for them to score,” Nemitz said. “We relied on our big guys to give us help.”

Augie Gerhart, the 6-foot-9, 235-pound center from The Hill School in Pottstown, grabbed eight rebounds to lead a 38-32 advantage on the boards. He also blocked six shots.

“Augie’s a great player,” Chilson said of the most recent addition to the team. “He’s huge.

“You don’t have to worry about the other team getting too many offensive rebounds.”

Eli Yusavage had a team-high four assists while Gabe Tanner, who was 3-for-4 from the floor, was the only player with two steals.

Tanner from Mid Valley and the Abington Heights combination of Marion and Nealon are all sophomores.

Nemitz is also from Mid Valley. Chilson is from Tunkhannock and Yusavage is from Valley View.

Return to this site for more coverage when teams wrap up the event Sunday.

MANHEIM – Three out of four NEPA Elite teams won during their second of two games today in The Hoop Group Spring Jam Fest.

The NEPA Elite Joyce 16U team wrapped up the day’s action with a 33-28 win over LA Elite in an HGSL consolation game.

Return to this blog for one more update tonight.

MANHEIM – Both NEPA Elite 17U boys teams bounced back from losses to begin the day to win their second games in The Hoop Group Spring Jam Fest.

Both teams play their final game at the event.

It was the second time in three games that the Miller team lost on its opponent’s final possession in the last 10 seconds.

Aidan Smola from Valley View drove the lane with 20 seconds left to force a 58-58 tie.

NEPA Elite got a quality look at the potential tying shot, but could not convert.

Ben Chilson scored 11 of his 13 points and Danny Nemitz scored all eight of his points in the second half of the win over Boo Williams.

The Coyle team controlled the boards and shut down a dangerous Boo Williams offense, allowing just 8 points in more than 16 minutes while turning a 9-4 deficit into a 27-17 lead.

“Boo Williams has a great reputation as an (Nike) EYBL team, so I was very impressed,” coach Brian Coyle said. “I’ve been impressed with our defense this entire weekend.”

The victory is worthy of a more-detailed recap, which is coming up later tonight.

Return to this blog as the evening progresses.

MANHEIM – The NEPA Elite Joyce 16U team made a spirited second-half comeback, but fell short this afternoon, falling to the Team Loaded Dream Warriors, 60-49, in a 16U consolation bracket game.

NEPA Elite is still looking for the program’s first win of the day, but the Joyce team appears to have something to build off of after cutting a 20-point deficit with 13:17 remaining – and a 15-point deficit with 6:19 left – to four points with 2:34 still to play.

NEPA Elite cut down on its turnovers in the second half while Ricky Vinansky, George Sabatini and Gerry Rose took over on the boards.

The Warriors closed out the win with the game’s last six points.

NEPA Elite had a 45-32 rebounding advantage in the game, including 23-12 in the first 13½ minutes of the second half.

Team Loaded pressed effectively throughout the first half. It forced 25 turnovers in the game, including 17 while building a 34-20 halftime lead.

Rose had eight rebounds, two assists and two steals to go along with his game-high scoring effort.

Vinansky scored all five of his points and grabbed six of his eight rebounds in the second half.

Vinansky is from Mid Valley, Sabatini from Holy Redeemer and Williams from Dallas.

Earlier this afternoon, Hoop Roots spoiled the debut of the NEPA Elite Cooper 17U boys with a 75-46 victory in a 17U Spooky Division game.

Dane Schutter from Wyoming Area scored all nine of his points in the second half.

Joe Macciocco from Old Forge had six points on two first-half 3-pointers and finished with a team-high three assists.

MANHEIM – All four NEPA Elite boys teams – Coyle 17U, Cooper 17U, Joyce 16U, Miller 15U – have two games scheduled today in the Spring Jam Fest.

Three of the teams opened their seasons Friday night and two got in their first games of the day this morning.

The Coyle 17U and Miller 15U teams lost their morning games.

There have been mixed results for the Coyle team so far.

NEPA Elite was scheduled to open with a Showcase Game Friday at 6 p.m., but New York Lightning, the scheduled opponent, got stuck in traffic and missed the game.

After being awarded a forfeit for the Showcase opener, NEPA Elite played a replacement exhibition game, but lost.

Young & Reckless HGSL knocked NEPA Elite out of the championship bracket this morning, 55-39.

The NEPA Elite Cooper 17U team is about to make its debut at 12:30 in the 17U Spooky Division Championship bracket.

The Joyce 16U team played Friday night and lost to Team Mayo HGSL, 56-54, in a championship bracket game.

Team Mayo scored off an offensive rebound in the closing seconds to decide the game.

The Miller 15U team also lost a close game Friday night, falling to the New Jersey Panthers, 58-55, in a Championship bracket game to open its season.

NEPA Elite fell into a 15U Consolation bracket where it lost this morning, 57-26, to Team Takeover National HGSL.