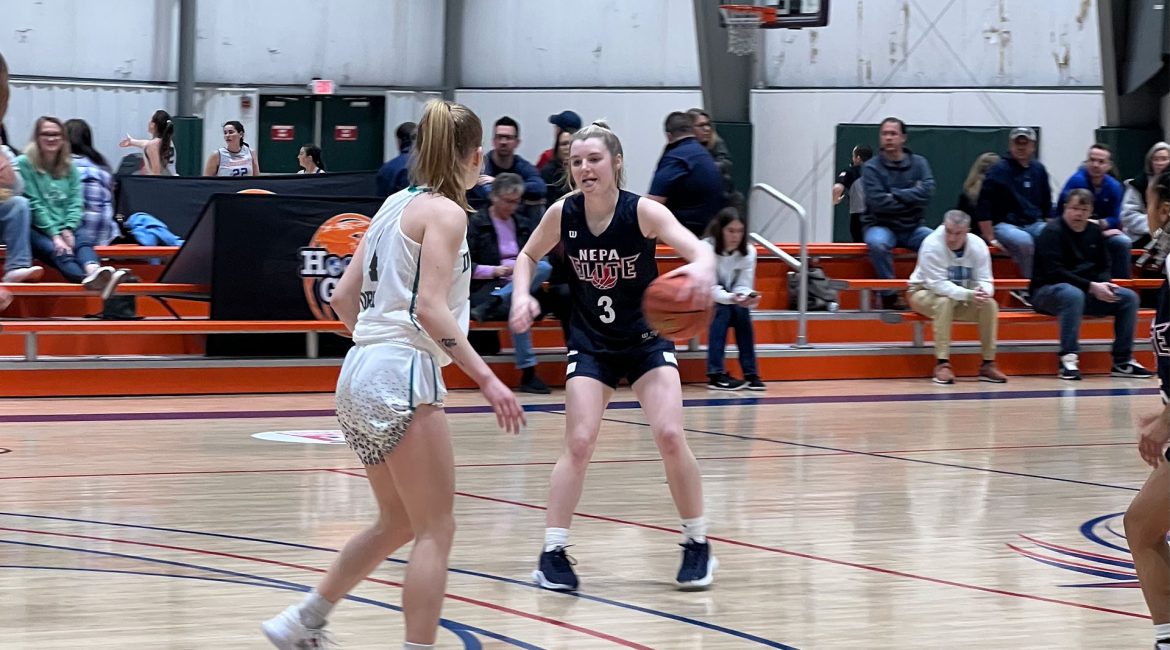 SCRANTON – With practice time limited during the small window between the end of the high school season and the start of AAU competition, teams were still getting used to each other during Saturday and Sunday’s PA Warm-Up, a season-opening Hoop Group girls basketball event.

“I think everybody playing in tournaments is in the same boat,” said NEPA Elite founder Kevin Clark, who serves as the head coach of the oldest and youngest of the AAU club’s five girls teams. “I don’t think there’s a lot of practices or time in between high schools and the first tournament like there usually is, but I think it gives everybody a chance to see where they’re at and what they need to do.”

“As far as our girls go, I think there’s a lot promise; a lot of skill,” Clark said. “Once we get a few practices and tournaments under our belt, I expect the program to be a lot different in June and July than it is today in April.”

A recap of Sunday’s action for the NEPA Elite and NEPA NXT teams, which hosted the event on their home courts at Riverfront Sports in Scranton, along with the University of Scranton:

Zya Small turned in a huge effort and got plenty of help as the NEPA Elite Clark 13U team began the day with its third straight blowout victory, before being pushed for the first time in its second victory of the day and fourth of the weekend.

NEPA Elite downed New Jersey Shoreshots 2027-Dubina, 64-31, before breaking away in the second half of a 51-32 victory over the Hazleton Lady Cougars.

The team won its four weekend games by an average of 59-25.

“Overall, I thought the girls had a great weekend and I’m real excited about where they can go,” Clark said.

Small, from Scranton, led the team made up of seventh-graders by scoring 19 points, grabbing 23 rebounds, making 5 steals and dishing out 2 assists. She grabbed 17 of the rebounds on the offensive end before sitting down for good with 9 minutes still remaining.

Eva Kaszuba and Cora Castellani, both from Valley View, added 11 and 10 points.

Ella Clementoni grabbed eight rebounds while Chrissy Jacklinski and Ava Fenton had seven each and Kayli McHugh had six. They were part of a 62-25 rebounding advantage that included 35 offensive rebounds.

Clementoni, from North Pocono, had nine points and five steals to go along with her eight rebounds. NEPA Elite had 22 steals while forcing 28 turnovers.

“I think we have a lot of strong qualities,” Clark said. “The first three matchups for us, we looked really good in transition.

“We were running our sets well and were hard-nosed on defense.”

The game against Hazleton was close early, with the teams trading the lead.

NEPA Elite began to pull away, but Hazleton ran off 10 straight points late in the half for an 18-17 lead.

Fenton scored on a baseline move to end the first half, putting NEPA Elite ahead, 19-18, on the last of eight lead changes.

The basket started a stretch in which NEPA Elite outscored Hazleton, 34-14, to end the game.

“We got tested pretty good,” Clark said. “They ran the floor well.

“It allowed us to see a lot of the things we needed to work on to improve.”

Jacklinski is from Scranton, Fenton from Valley View and McHugh from North Pocono.

The NEPA Elite Macciocco team’s margins got better with each game of the weekend.

NEPA Elite defeated New York Royals 2024 HGSL, 51-40, at the University of Scranton in the morning, then ran over New Jersey Freedom 16U HGSL, 51-25, at Riverfront in the afternoon.

Ella Wilson from Lake-Lehman led the win over New York with 14 points and 5 rebounds.

The game was tied, 8-8, five minutes in before Wilson hit two of her four 3-pointers 28 seconds apart. She added a free throw for the first seven points of a 13-point streak to a 21-8 lead.

While holding New York scoreless for six minutes, NEPA Elite got four straight points from Elizabeth Viglone, then a putback by Finley Bittenbender.

NEPA Elite wound up closing the first half on a 26-4 run and starting the second half with an 11-5 advantage to build a 45-17 lead.

Viglone is from Dallas and Bittenbender is from Scranton.

For the second straight day, the NEPA Elite Rini 15U team bounced back from a big loss early to pull out a win in a close game later.

Ella Smith was the leading rebounder with six.

The NEPA Elite Clark 17U was unable to contain a hot-shooting team in the morning and could not stop a hot-shooting player at key times in the afternoon while falling twice to finish 1-3 in the event.

Drill for Skill 17U HGSL-Miller topped NEPA Elite, 68-37, by building a big early lead, then New Jersey Shoreshots 17U HGSL pulled away late in a 64-47 victory.

“We’re still finding our identity and our chemistry, but there is a lot to work with there,” coach Clark said.

After scoring the game’s first 19 points, Drill for Skill opened the second half on a 21-2 run that included 16 straight points.

Daniella Ranieli, a freshman from Pittston Area, led NEPA Elite with 15 points and 3 steals. She was 5-for-8 from the floor, 2-for-3 on 3-pointers and 3-for-4 from the line.

Davis grabbed 10 rebounds in less than 10 minutes at the start of the game against New Jersey. The Pocono Mountain West standout wound up with 11 points and 20 rebounds in the game to finish the weekend with team-high totals of 57 points and 41 rebounds.

“I thought V had a great weekend overall,” Clark said. “I think we’re going to be able to play a lot off of her.”

Mackenzie Perluke from Wyoming Valley West was the top NEPA Elite scorer against Shoreshots, going 5-for-10 from the floor for 13 points.

Casey Prior made six 3-pointers while scoring 22 points for New Jersey.

Perluke scored the last basket of the first half, then scored twice in the first 3:03 of the second half while Cadie Lewis and Aaliyah Cancel made 3-pointers as NEPA Elite cut a seven-point deficit to 40-38.

That’s when Prior took over. She made three 3-pointers and another basket in less than seven minutes, hitting from beyond the arc to start and end a 17-3 run to a 57-41 lead.

Lewis is from Dunmore and Cancel is from Pocono Mountain West.

Team Elevation scored the final 10 points after NEPA Elite led most of the first game.

Mackenzie Schirg from Lackawanna Trail scored 19 points, grabbed 7 rebounds, dished out 4 assists and made 3 steals in the game against Team Elevation. After missing an early 3-pointer, she made her last seven shots, including three 3-pointers.

Schirg was the team’s leading scorer again against Long Island when she had seven points.

The NEPA NXT teams found more success on the second day with five of the teams picking up wins, including two winning in their only contest of the day.

The Kersey 13U team and Mellon 12U team each won its only game.

The Kersey team pulled away in the second half to defeat In the Zone-Kocha, 44-29.

The Kersey team and the NEPA NXT 17U team each had a win Sunday after an on-court win Saturday. The Mellon team had a forfeit win Saturday to join them at 2-1 for the weekend.

Sunday’s other wins were by the Scoblick 14U and Sunseri 14U teams. 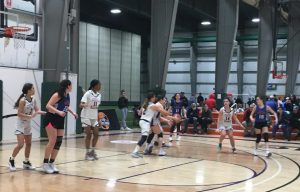