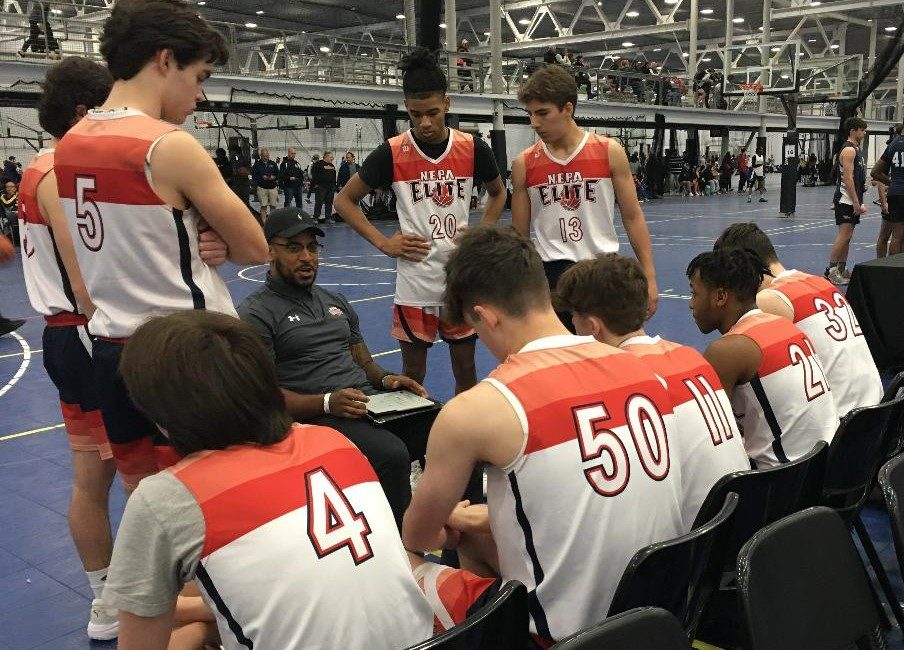 MANHEIM – The NEPA Elite Cooper 17U boys looked like a different team while playing in the consolation round of The Hoop Group Spring Jam Fest 17U Spooky Division Saturday night and Sunday.

Coach Brad Cooper said it was more about taking a different approach than in the season-opening blowout loss in the championship bracket of the division early Saturday.

Cooper took one for the team.

Also the men’s coach at Keystone College, Cooper said he took the wrong approach to his first game leading the AAU team.

“I was overthinking some things,” Cooper said. “It’s AAU. Teams don’t know us as well.

“So, we just had to keep it simple. That first game was on me.”

The NEPA Elite team finished the weekend 2-1 with Cooper simplifying his message, telling the team repeatedly to “advance it” as it used the transition game to put itself in better position offensively.

That was particularly true in a late first-half flurry, spurred by the running game, which ultimately gave the team enough to escape with a 47-44 overtime victory over New Jersey Shoreshots-Mercer.

NEPA Elite also defeated New York Finest, 60-49, in its second Saturday game after falling, 75-46, to Hoop Roots in the opener.

Mason Fedor had a double-double in the closing win and James Pettinato hit the winning shot after leading the surge at the end of the first half.

Fedor, from Abington Heights, scored in double figures in all 3 games, finishing the weekend with 43 points. He had 16 points, 12 rebounds, 3 steals, 2 blocked shots and 2 assists against Shoreshots.

Pettinato, from Scranton Prep, had 13 points, including the elbow jumper that ended the game under overtime rules, which awarded the win for the first team to score five points in the untimed extra session.

“We wanted to get him isolated one-on-one,” Cooper said. “ … James stepped up with confidence and hit the shot.”

Kalani Antoine had made a steal with seven seconds left in regulation and kept the ball until nailing a deep, contested 3-pointer with one second left to lift New Jersey into a 42-42 tie.

Robert Eaves, who powered his way to 16 points inside, scored the first basket of overtime to put the Shoreshots ahead.

Kellen Casey made one of two free throws before Fedor found Julian Pagan for the go-ahead basket.

NEPA Elite got a stop, then Pettinato dribbled the ball up the right side to start the offense, kept control and worked his way to the left side to hit the winning 17-footer.

Eaves had eight points, including twice converting offensive rebounds, during a 14-2 run to give Shoreshots a 19-12 lead 10 minutes into the game.

NEPA Elite otherwise controlled the boards. In addition to Fedor’s 12 rebounds, Dane Schutter had 9, Casey 6 and Patrick Walsh 5 to help NEPA Elite to a 47-39 advantage.

Pettinato was 4-for-4 with nine points during the run. He started it with a 3-pointer, but also outran the defense for two of the three NEPA Elite layups during that time.

Pettinato converted long lead passes by Walsh after a steal and Casey after a rebound. Fedor also took a defensive rebound and made the long outlet pass to Justin Love for the last basket of the half.

“Mason Fedor did a great job on the boards,” Cooper said. “Once we were able to contest, we got stops and got rebounds.

“We were in the right spots. Dane Schutter did a great job of being in the right spots to be able to contest shots. Then the rebounding by Dane, Mason, Kellen Casey and Pat Walsh allowed us to push the ball up the sideline.”

Pagan scored 13 of his game-high 15 points in the second half to lead Saturday night’s win against New York Finest.

NEPA Elite overcame a 29-25 halftime deficit, then Pagan helped put the game away by scoring his last six points from the line.

Fedor and Casey added 12 points each.

Casey is from Scranton Prep. Pagan and Love are from Pocono Mountain West; Schutter from Wyoming Area; Walsh from Abington Heights; and Macciocco from Old Forge.

Run Time Citi scored 11 of the game’s final 12 points during the last 1:52 Sunday morning to rally past NEPA Elite Coyle 17U, 69-68, in an HGSL consolation bracket game.

The Coyle team finished 2-2 in bracket play at the tournament, winning its first, then losing its second in both the winners’ bracket and in consolation play.

NEPA Elite appeared headed to a win in its final game of the opening weekend until problems keeping Run Time Citi off the offensive boards proved costly.

Run Time Citi, which used 25 offensive rebounds for a 43-32 advantage on the boards, got three baskets on putbacks and three points off steals while NEPA Elite was going 1-for-5 at the line during the comeback.

NEPA Elite built the lead by running an efficient, half-court offense that repeatedly got the ball inside for dunks and layups. The team finished 57.9 percent from the floor (22-for-38) and 54.5 percent from 3-point range (6-for-11).

Augie Gerhart led the way with 19 points and 5 blocked shots. He was 7-for-9 from the floor and 5-for-7 from the line.

Zach Perta went 3-for-4 from the floor while adding 11 points and 2 steals.

Ryan Nealon was 3-for-4 on 3-pointers for nine points.

Gerhart is the from the Hill School while Tanner is from Mid Valley, Perta from Holy Redeemer, Nealon from Abington Heights, Nemitz from Mid Valley and Chilson from Tunkhannock.