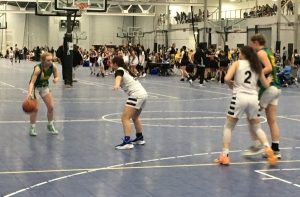 MANHEIM – The Macciocco 16U and unbeaten Clark 13U teams each went 2-0 Saturday, leading the way in making it a winning day overall for the NEPA Elite girls program at the Select Events Basketball Live! at the Nook.

The Butler 16U and Rini 15U teams each split their games while the Clark 17U team had a second-game comeback fall short and ended up losing twice. That left the teams out of Riverfront Sports in Scranton with a 6-4 record for the day at Spooky Nook Sports in Lancaster County.

All five teams also played twice Friday and have one game remaining Sunday.

A look back at Saturday’s action:

NEPA Elite began its day with a 54-45 victory over LGB Select 2024 and finished on an even higher note by taking control late in the first quarter on the way to a 60-31 victory over Fencor, which came into the game with a 3-0 record in the 2024 Division Pool E.

After closing the first quarter strong for a 21-11 lead with the help of 3-pointers by Elizabeth Viglone, Sophia Talutto and Finley Bittenbender, NEPA Elite made it to halftime with a 28-19 lead over Fencor.

NEPA Elite gave up just one field goal and got scoring from six different players during a 15-3 third quarter for a 43-22 lead.

Bittenbender hit 3-pointers in each of the last two quarters to finish with 11 points and Ella Wilson scored 9 of her 10 points in the second half.

“They did a great job of moving the ball; sharing the ball,” coach Tara Macciocco said. “It was very unselfish basketball.”

Sisters Kennedy and Finley Bittenbender, Talutto, McDonald and Montgomery formed the combination that controlled the LGB Select game on the defensive end late to produce the day’s first victory.

“I just think defensively today, we were just better overall, but especially in that first game,” Macciocco said. “We were down in the last five or six minutes or so and came back and won it.”

With the Bittenbenders committed to their Scranton High School softball game Friday, the Macciocco team opened the tournament Friday night with five players – Montgomery, Talutto, Wilson, Viglone and McDonald – going the distance in each game. They dropped a pair of two-point decisions, one of them in overtime.

“They did everything they possibly could,” Macciocco said. “They worked extremely hard. I was really proud of how they played (Friday).”

Wilson is from Lake-Lehman, Talutto from Dunmore, Montgomery from Honesdale, Viglone from Dallas and McDonald from Abington Heights.

The 13U team followed a similar path to its two victories, rallying in the second half of a close first game and running away for a comfortable win in the second.

Zya Small had a triple-double and Chrissy Jacklinski sparked the third-quarter comeback in the first-place battle.

Jacklinski had eight points, two offensive rebounds an assist and a steal during a 15-4 third quarter that NEPA Elite used to overcome being held without a field goal in the first quarter and to just nine points in the first half. She finished with 13 points, 8 rebounds and 3 steals.

NEPA Elite had to overcome 34 turnovers, including 10 in the first 5:32 of the fast-paced game.

SLAAM scored the first basket of the second half for its biggest lead, 16-9, but Jacklinski then immediately went to work on leading the game-changing 21-4 run for the biggest lead in the other direction at 30-20 midway through the fourth quarter.

Jacklinski started the run with a 3-pointer, then grabbed an offensive rebound and made one of the two free throws that resulted. Her steal and assist to Ella Clementoni created the first NEPA Elite lead at 19-18 with 2:09 left in the third and she followed it with a fast-break putback and another score in transition to make sure the team was in front to stay.

Jacklinski added a three-point play off a Clementoni feed for the last basket for the run.

Jacklinski had 13 points and 5 rebounds to lead the second win.

New Jersey had a three-point lead midway through the first quarter, but NEPA Elite went on a 28-2 run, including 22 unanswered points, for a 33-10 lead with 3:09 left in the half.

The rest of the game was played under the Mercy Rule.

Emma Coleman went 3-for-4 from the floor while adding eight points.

Small and Jacklinski are from Scranton; Kaszuba, Castellani and Fenton are from Valley View; Clementoni is from North Pocono and Coleman is from Abington Heights.

The Butler 16U team split its 2024 Division Pool H games for the second straight day.

Brenna Hunt from Lake-Lehman scored 16 points while Gabby Marsola from Wyoming Valley West had 10 points in the win.

Mackenzie Schirg from Lackawanna Trail was the top scorer in the loss with 12.

Jenna Hillebrand from Scranton Prep and Maggie Coleman from Abington Heights led a late comeback in the first game and got the team off to a fast start in the second game.

Hillebrand had 13 of her game-high 15 points in the second half against HEAT Hoops. She also grabbed five rebounds.

Ella Smith led the team in rebounds with eight. She also joined Maggie O’Shea in adding six points to the offense.

A Hillebrand steal led to a Coleman putback to begin the run. Madeleine Walsh’s long outlet gave Hillebrand a layup to cut the deficit to six.

After HEAT Hoops scored, Coleman hit a 3-pointer, then blocked a shot, controlled the rebound and found Hillebrand for a foul-line jumper at the other end.

Hillebrand again pushed the pace off a defensive rebound and Madelyn O’Shea set up a Smith basket with 10 seconds left in the quarter to bring NEPA Elite within 34-33.

Coleman opened the fourth quarter with an elbow jumper for the first of seven lead changes over the next four minutes.

NEPA Elite then pulled out the win by holding HEAT Hoops scoreless for more than three minutes while scoring the game’s last five points.

Hillebrand hit a free throw, Maggie O’Shea scored on a drive, then both went 1-for-2 at the line late to finish off the victory.

NEPA Elite held Connecticut scoreless for 4:37 and without a field goal for 8:46, but could not sustain the fast start.

Hillebrand had six points and Coleman five for an 11-0 lead after just 3:20.

Coleman, Hillebrand, Bella Dennebaum and Helayna Weidow all blocked shots during Connecticut’s 0-for-14 first quarter from the floor.

The NEPA Elite Clark 17U team ran into two hot-shooting opponents in the 2023 Division Pool B.

Michigan Mystics Finest used 9-for-13 accuracy from 3-point range over the final three quarters to fight off an NEPA Elite comeback in a 63-58 victory.

NEPA Elite cut an 18-point deficit to 11 with a 10-3 second-quarter run against Elevate Elite, but could not get any closer.

Kyomi McMiller, a highly regarded prospect from South Carolina who joined the team for the first time this weekend, had 24 points, 11 rebounds and 5 blocked shots for NEPA Elite in the loss.

NEPA Elite trailed by 13 points twice in the third quarter against Michigan, but came back to lead in the last two minutes and was within one point with 20.4 seconds left before falling short.

McMiller had 18 points and a team-high 4 assists.

Daniella Ranieli, a freshman from Pittston Area, made four of her first five 3-point attempts, including the go-ahead shot in the fourth quarter. She had 12 points and 3 assists.