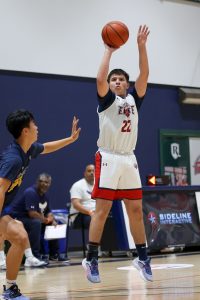 After using an offensive outburst in the opener to earn a split of Saturday’s two games, the Joyce team turned to defense to make it a winning weekend in the KYDA Invitational at Riverfront Sports.

NEPA Elite limited the Utica Select Jayhawks to 4 points for a stretch of more than 10 minutes in the first half of its only Sunday game to take control on the way to a 48-31 victory.

Of the 22 teams that participated in the 16U Division of the second annual KYDA Invitational, presented by Top Tier Events, NEPA Elite was among the 9 that finished with winning records.

By the time Utica came up with any answers for the NEPA Elite defense, it was facing a 23-10 deficit late in the first half.

“I try to tell my guys all the time, we’re not going to be the most athletic, quickest team out there, so I really try to preach on the defensive end taking the right angles, stopping your guy on the drive, limiting teams to one shot and just consistently doing that,” coach Corey Joyce said. “We’ll put ourselves in a good position if we do that stuff.”

Utica scored the last three points of the first half and first four of the second to get within, 23-17.

Gerry Rose’s drive halted that streak and NEPA Elite slowly pulled away over the final 13 minutes.

“We really shot the ball well,” Joyce said of the opener. “We really ran our sets well and in the second half, they went to a 2-3 and we kind of shot them out of it.

“Brycen Martin, particularly, had a really good second half, shooting the ball really well. When we get hot like that offensively, we’re tough to beat.”

A recap of Sunday’s action for the other NEPA Elite boys teams in the KYDA Invitational.

Rose is from Riverside and Martin from Scranton Prep.

NEPA Elite put together a spirited battle in its first game of the day, but was unable to duplicate it in a blowout loss to end the event.

Playing a Colorado Hawks team with the six tallest players on the floor – all between 6-foot-11 and 6-6 – and two of the top 50 prospects in the country in the Class of 2023, according to ESPN – NEPA Elite rallied repeatedly and got the game into overtime in a 52-49 overtime loss.

The PSA Cardinals then ran away from NEPA Elite, 73-37.

Gabe Gonzales mixed it up with the Hawks on the inside, then Danny Nemitz and Ben Chilson hit 3-pointers 22 seconds part for the last 6 points of regulation to get the game with Colorado into overtime.

Gonzales, a 6-foot-3 forward from Holy Cross, grabbed a team-high nine rebounds. He also shared team scoring honors with Chilson with 12 points each.

Nemitz and Chilson each made two plays to help NEPA Elite recover from trailing 45-39 late.

After making a 3-pointer, Nemitz found Chilson for the tying shot.

Colorado held the ball for the final 50 seconds, using a timeout with 30 seconds left to set up an isolation in the post.

Chilson, a 6-5 forward from Tunkhannock, knocked away the entry pass and Will Marion got to the loose ball in the last two seconds to end the threat and force overtime.

Colorado led by as many as nine points in the first half and seven in the second half.

Assane Diop, a 6-10 junior from Denver who is one of the Colorado prospects, dunked on the first possession of overtime to put the Hawks ahead. He blocked the first three NEPA Elite shots of the extra sessions and finished with 10 points, 14 rebounds and 5 blocks.

Quis Davis went 4-for-4 from the line in overtime to help secure the win. He finished with 14 points, 6 rebounds and 3 steals.

Chilson was 3-for-4 from 3-point range. Gonzales made his last five shots and was 2-for-2 on 3-pointers.

Marion had nine points. He had 4 steals and Nemitz 3 as NEPA Elite forced 22 turnovers.

A combination of quality shots and accuracy on the more difficult ones allowed PSA Cardinals to shoot 59 percent while taking a 35-20 halftime lead.

The shooting numbers got even better in the second half.

The Cardinals hit their first seven shots of the half to expand the lead.

Jayden Reid led the way, making all six of his shots to finish with 14 points and 4 steals. Five teammates added at least eight points.

Nemitz is from Mid Valley, Marion from Abington Heights, Perta from Holy Redeemer and Lee from West Scranton.

NEPA Elite was tied at halftime in its only 15U Division Pool A game of the day before falling to Riverside Hawks, 57-39.

Five Hawks made 3-pointers in the second half when they outscored NEPA Elite, 34-16.

Silva is from Pocono Mountain West, Matrone from Scranton Prep and Jackett from Wyoming Seminary.

Additional coverage of the KYDA Invitational is available at the Top Tier Events website on the KYDA page at: https://toptiereventssports.com/kyda/.

NEPA Elite Saturday coverage can be found at: https://nepaelite.com/2022/05/marion-helps-coyle-team-to-2-0-day/.

The Sunday blog of overall KYDA Invitational coverage can be located at: https://toptiereventssports.com/kyda-invitational-sunday-blog/.

The Saturday blog of overall KYDA Invitational coverage can be located at: https://toptiereventssports.com/kyda-invitational-saturday-blog/.

Video highlights can be viewed at: https://www.instagram.com/toptierevents3/.

Scores and schedules can be followed at: https://basketball.exposureevents.com/180512/kyda-invitational-presented-by-top-tier-events/schedule.