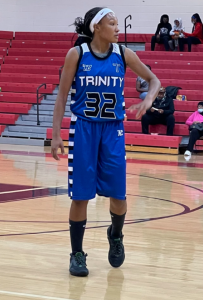 The NEPA Elite Clark 13U team defeated Mass Lady Rivals 7th Future, 69-37, by committing just one turnover and making more than half of its shots while breaking away from a four-point game at halftime.

After trailing by 16 three times, the NEPA Elite Clark 17U girls closed within 4 points twice in a 76-71 loss to New York Hoops Extreme Red.

McMiller scored 42 points, the most by any NEPA Elite player, boys or girls in the three-year history of the program out of Riverfront Sports in Scranton. She scored a dozen of those points in a 20-8 burst over a stretch of 3:45 late in the game.

A look at the NEPA Elite teams on Day One of the three-day Atlantic City Showcase:

Chrissy Jacklinski scored 17 points and Zya Small had a double-double to lead NEPA Elite in the 2027 Division Pool B game.

Cora Castellani scored all 12 of her points in the second half while Small was scoring 11 without missing a shot.

Jacklinski, Small, Castellani and Clementoni all put together strong all-around games while Ava Fenton went 4-for-6 from the floor to chip in nine points.

Jacklinski scored the team’s first seven points, including a 3-pointer followed by a putback of her own miss that turned into a three-point play.

Missed layups, however, kept NEPA Elite from pulling away in the first half.

There were three lead changes and a tie in the first six minutes and NEPA Elite only led by four at halftime.

Jacklinski converted a steal into the last basket of the first half, then worked her way inside to complete a three-point play, giving her half the points in a 10-1 run to a 33-22 lead with 13:37 left. She finished with eight rebounds, six on the offensive end.

Small missed her first shot, then finished 6-for-7. She made four shots from the floor and three from the line in the second half to finish with 15 points, 10 rebounds and 6 blocked shots.

Castellani hit a pair of 3-pointers on the way to 12 points, 6 steals, 5 rebounds and 4 assists.

Clementoni had 7 points, led the team with 12 rebounds, made 5 steals and shared the team lead of 4 assists.

Jacklinski and Small are from Scranton. Castellani and Fenton are from Valley View. Clementoni is from North Pocono.

McMiller did more than turn in her record-setting scoring performance.

The eighth-ranked prospect nationally in the Class of 2024, according to ESPN, McMiller had team-highs of nine rebounds, six steals, four assists and two blocked shots. The 5-foot-7 point guard from Trinity Collegiate High School in Darlington, S.C. went 16-for-34 from the floor, 6-for-14 on 3-pointers and 4-for-4 from the line.

Eva Dechent hit a 3-pointer at the halftime buzzer to give New York a 34-29 lead in the 2023 Division Pool E game. She had five more points as Extreme Hoops built from the buzzer beater into in 19-5 run to a 50-34 lead.

That run included Extreme Hoops hitting its first three 3-point attempts of the half.

Mackenzie Perluke had 8 of her 12 points in the second half for NEPA Elite. She also had five rebounds and three steals.

Emily Romanowski scored nine points and grabbed seven rebounds. Her 3-pointer with 29 seconds left made it 75-71.

Perluke is from Wyoming Valley West, Romanowski is from Western Wayne and Lewis is from Dunmore.

Mackenzie Schirg led the defense in the second half, blocking two shots and making a steal.

The game represented progress for NEPA Elite, which lost 77-32 to the same opponent earlier in the year.

Hunt made the team’s play of the day with 6:25 left. She emphatically swatted away a shot on the defensive end of the floor and started running up court trailing the fastbreak. When Schirg could not convert, Hunt floated through the lane, controlled the rebound and flipped up a reverse layup that she banked in before returning to the floor.

Hunt is from Lake-Lehman, Cooper from Valley View, Marsola from Wyoming Valley West and Schirg from Lackawanna Trail.