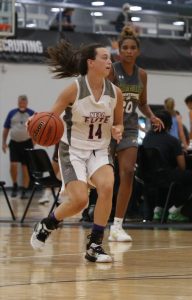 The Scranton Prep graduate had informed the coach and announced the decision on her Twitter account Tuesday.

Rose goes from one Spartanburg, S.C. National Collegiate Athletic Association Division I program to another. The Big South Freshman of the Year at University of South Carolina Upstate had entered the transfer portal immediately after head coach and Abington Heights graduate Becky Burke left the program to become head coach of the University at Buffalo.

“We were really excited to get the call from Rachael on her commitment to our program,” Garrity said, according to a story on the school’s athletic website. “When we saw her name in the transfer portal, we immediately reached out to her and started building a relationship.

“Watching her on film, she’s been one of the toughest and grittiest players I’ve seen. She had a tremendous freshman season at Upstate.”

As a first-time transfer, Rose will be eligible to play right away for the Terriers.

The 5-foot-7 guard is the fourth member of her family to play Division I basketball. Her aunt Missy was a captain at the University of Connecticut, her uncle Craig played for Army and her older brother Timmy played for Binghamton University.

Rachael Rose shot 54.6 percent overall and 40.3 percent from 3-point range while averaging 13.1 points, 5.1 rebounds and 3.6 assists per game as a freshman at USC Upstate.

Rose was one of five current or future Division I players who helped the original NEPA Elite Clark 17U team win the Hoop Group Showcase League title in 2020.

At Scranton Prep, she was a four-time, all-state selection while leading a team that never lost a Lackawanna League regular-season or District 2 playoff game. The Classics went 28-0 in her junior season.

“We are getting a really good player in Rachael,” Garrity said. “I look forward to her impact on our team both on and off the court.”