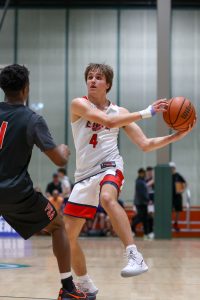 The NEPA Elite Coyle 17U boys team won its pool Saturday in The Summit, presented by Zero Gravity, at Spooky Nook Sports in Manheim, Lancaster County.

NEPA Elite will face Middlesex Magic-Alex ZGXL Sunday at 10:20 a.m. in the championship bracket quarterfinals. It would need three more wins to take the bracket championship.

Eli Yusavage went 3-for-4 from 3-point range while scoring 15 points, grabbing 8 rebounds and making 3 steals in the first win.

Yusavage is from Valley View; Chilson from Tunkhannock and Lee from West Scranton.

A recap of how the other NEPA Elite teams did Saturday:

The NEPA Elite Cooper 17U team split two games in the 17U Pool R, but also won its three-team pool when all three teams went 1-1, but NEPA Elite had the best point differential.

NEPA Elite advances to play in the 17U Gold Championship bracket.

Julian “Juju” Pagan from Pocono Mountain West led the way in the victory with 22 points, 5 rebounds, 5 assists and 5 steals.

The team will compete Sunday in the 16U Gold Consolation bracket.

Matrone scored 14 points in the overtime loss. He had 16 in the second game while James Pappas scored 15 and Marc Jackett 10.

Matrone and Pappas are both from Scranton Prep while Jackett is from Wyoming Seminary.