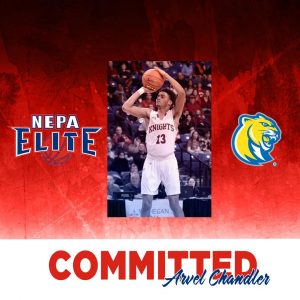 Chandler committed in May to play National Collegiate Athletic Association Division III basketball at Misericordia University where his uncle, Will Chandler, also a Scranton graduate, is the head coach after being the most decorated player in the program’s history.

Arvel Chandler passed up a full scholarship offer from Point Park University, a National Association of Intercollegiate Athletics program in Pittsburgh, to stay closer to home and play for his uncle.

“Junior year, he would say to me, ‘you always have a spot here’,” Arvel said.

Before deciding to choose that, Arvel said it was helpful to have advise available from “Uncle Willie.”

“He was a big help because obviously he was really good at basketball himself,” Arvel said. “It was nice to have somebody who has been though what I’ve been through.”

After gaining attention for his play with NEPA Elite in the 2021 AAU season, Chandler more than doubled his scoring and more than tripled his 3-point production from his junior to senior seasons at Scranton. He became a first-team Lackawanna League Division 1 all-star selection by NEPABasketball.com while helping the Knights repeat their division and District 2-4 Class 6A titles on the way to the state quarterfinals.

“Last summer, I probably played the most basketball I ever have,” Chandler said. “I think I was a better shooter in general, but I was in the right spots. I knew where to go when my teammates would drive. I think that’s what made me better and my teammates were good at finding me.”

Misericordia is coming off a 10-17 season, including 7-9 in the Middle Atlantic Conference Freedom.

The Cougars were in the Pennsylvania Athletic Conference during Will Chandler’s playing days and he was the four-time Player of the Year in the conference while scoring 2,898 points to finish his career in the number-two spot in NCAA Division III history. The two-time national scoring leader and three-time All-American went on to play professionally for five seasons in Europe, South America and the United States Basketball League.