Defense put 13U team in control early in title game 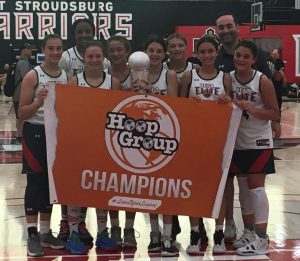 Mid-Atlantic was unable to solve the NEPA Elite defense, missing its first 15 shots from the floor after taking its only lead at 1-0.

By the time the Magic scored again, it was trying to cut into a 19-1 deficit.

NEPA Elite’s defense produced 16 steals and 8 blocked shots while limiting Mid-Atlantic to 17.9 percent shooting for the game, including 7.7 percent in the first half. NEPA Elite led, 32-12, at the half.

Zya Small, who led the balanced offense with 14 points, made 3 steals and was one of 3 players with a pair of blocked shots.

Chrissy Jacklinski, who scored 11 points, and Eva Kaszuba were the other players with 2 blocks.

Ava Fenton shared the team rebound lead of six with Kaszuba and the team assist lead of three with Castellani.

During the 19-point streak to the 19-1 lead, Small had eight points and Castellani had all seven of her points.

Defense contributed to half of Small’s points in the run.

A Clementoni steal led to Small scoring on the rebound of her own miss. The next basket came when Small anticipated a 3-point attempt from the top of the key, raced out to block it, and swatted it to near midcourt where she ran down the rebound ahead of the pack and turned it into a breakaway layup.

NEPA Elite made the title look easy. The final was the closest of four weekend games for a group that turned in many similarly dominant performances a year ago in lower-level events.

“We really tried to ramp up the competition this year for the 13U group,” coach Kevin Clark said. “We knew they were a special group so we really wanted to challenge them.

“They continue to get better. They have great chemistry. They’re extremely unselfish and I’m excited about them for the future.”

The team features Castellani, Kaszuba and Fenton from Valley View; Small and Jacklinski from Scranton; Clementoni and Kayli McHugh from North Pocono; and Emma Coleman from Abington Heights. All of the players were seventh graders for the 2021-22 school year.