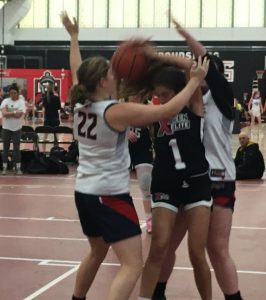 EAST STROUDSBURG – The NEPA Elite Butler 16U and Clark 13U teams used strong defensive efforts Friday night as the program’s teams came away with wins in two of three games on the opening night of The Hoop Group Girls Pennsylvania Jam Fest on the campus of East Stroudsburg University.

The Butler team made it through a defensive struggle to post a 26-17 victory over XGen Elite 16U Regional team.

As the Butler team was finishing up, the Clark 13U squad was already running away with what became a 57-16 rout of New Jersey 2027-Chambers/Bowler.

A recap of Friday’s action in the three-day event:

Brenna Hunt set the tone with a steal and two free throws to open the scoring. She wound up with 11 points, 9 rebounds, 7 steals, 3 assists and 2 blocked shots.

Seven of the eight players made steals and six of them blocked shots, led by three from Sophia Summa.

NEPA Elite opened a 9-1 lead before hitting its own offensive dry spell.

Summa helped extend the stretch in which NEPA Elite did not give up a field goal for the first 11:14. She chased down an XGen player from behind on a breakaway and blocked the shot on the way up for the first of two times in the game that she not only blocked an attempt, but sent the ball off the shooter’s leg and out of bounds to gain possession.

XGen’s first basket made it 9-8, but NEPA Elite remained ahead throughout, scoring nine of the next 10 points. Hunt had six of those points, the last four on breakaways.

NEPA Elite forced 26 turnovers, held XGen to 0-for-10 shooting from beyond the arc and only allowed 4 offensive rebounds, all in the second half.

Hunt is from Lake-Lehman, Summa from Dunmore, Marsola from Wyoming Valley West and Schirg from Lackawanna Trail.

Zya Small scored 10 of her game-high 16 points in the first half when NEPA Elite opened a 37-7 halftime lead in the 2027 Stroudsburg Division Pool B game.

Ava Fenton had all seven of her points while the team was building the big halftime lead.

Small led the team in points (six), steals (three) and blocked shots (two) during the second half.

Cora Castellani, who chipped in seven points, had five rebounds during the second half when she joined Kayli McHugh in contributing two steals each to the defensive effort.

Small and Jacklinski are from Scranton; Fenton, Kaszuba and Castellani are from Valley View; while McHugh and Clementoni are from North Pocono.

United NJ 15U Platinum broke away late in the first half of a 47-23 win over the NEPA Elite Rini 15U team in a 2025 Pocono Division Pool A game.