Locker to continue career at Marywood 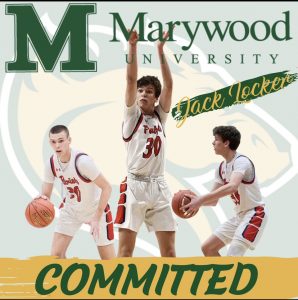 Jack Locker first played for Enrico Mastroianni in the spring and summer of 2020 when the NEPA Elite AAU program made its debut.

They will get together again now that Locker has committed to continue his academic and athletic careers at Marywood University where Mastroianni serves as head coach.

Locker, a recent Pittston Area graduate, considered schools outside the area in which he was not likely to fit the basketball program and compared them with Marywood University, which he considered his only local option for his major in architecture. A chance to get to know the basketball team during his visit to Marywood convinced Locker he could fit in there.

Locker’s game progressed over the past two seasons.

Previously a Backcourt Hoops Bulldogs player, Locker was coming off a sophomore season at Pittston Area where he barely saw varsity playing time when he moved up at Riverfront Sports in Scranton, making the NEPA Elite 16U team.

Combining an accurate shooting touch from 3-point distance with an improving overall game, Locker wound up playing two straight seasons with NEPA Elite teams and becoming more prominent in the Pittston Area program. He was in the rotation as a junior and a full-time starter as a senior, leading the team in 3-pointers made.

While he works on his shot a lot, Locker said he has also concentrated on “getting in the weight room and getting stronger and better on defense.”

Pittston Area won the District 2 Class 5A title and reached the second round of the Pennsylvania Interscholastic Athletic Association state tournament. Locker went 3-for-4 on 3-pointers while scoring 14 of his game-high 20 points in the second half of the district championship game at Mohegan Sun Arena at Casey Plaza.