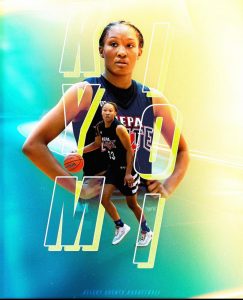 By Tom Robinson, NEPAElite.com
Everywhere Kiyomi McMiller goes in her basketball travels, she brings along a wide array of ball-handling moves, capable of baffling opponents and mesmerizing even her teammates.
Impossible to miss on the court, McMiller is the player that makes others gravitate to her game during multi-court AAU basketball tournaments. Those who have seen the show before come back for another look; the ones who haven’t are usually heard courtside asking ‘Who’s That?’”
The list of those wondering who they are watching is shrinking as the NEPA Elite Clark 17U player from Silver Spring, Md. continues to draw attention – for her overall basketball skills and specifically for her ball-handling wizardry.
The latest attention came Thursday morning when ESPN posted its “Superlatives for women’s college basketball recruits,” ranking the best in the country in nine skills or traits.
McMiller, selected as the nation’s Best Ballhandler among women’s basketball prospects, was one of three players from the Class of 2024 – the others were all from the Class of 2023.
The 5-foot-8 point guard dribbling the ball, either as she walks the ball up court in the set offense or pushes it up the floor in transition, is a show within the show during an NEPA Elite game. Teammates watch for her next move – or the next three, four or five that she frequently rattles off in rapid-fire sequence – and defenses shift as they seek out new ways to cut off her path to the next basket or assist.
McMiller came to NEPA Elite between the first and second weekend of competition this AAU season. As a player who has been exposed to many teammates through USA Basketball events, high-profile prospect camps and high-level playing opportunities, McMiller was used to trying to blend in with a new group. With that in mind, she had a strategy on her first trip to Riverfront Sports in Scranton to practice with her new teammates.
“I adjust very well to other people,” McMiller said. “I play a lot of pick up, too, so that helps a lot as well.
“For people to get used to me, I just have to bring out all my crazy stuff first so people expect it. That way, when I do it in a game, they’re ready for it.
McMiller’s ball-handling expertise goes well beyond the between-the-legs and behind-the-back moves to adding those touches from a myriad of angles and often in succession all while head-and-shoulders fakes and other movements leave defenders wondering where to look next.
Widely recognized as one of the nation’s top 10 overall prospects in the Class of 2024, McMiller hopes to have her teammates ready for the next move while defenders are still trying to figure it out.
“That’s really how I prepare them,” she said. “I bring everything out in practice, then try to do it in games.”
The moves open up space for McMiller to pile up points at a clip of 28 per game for NEPA Elite. At other times, they draw so much defensive attention that additional space develops for her teammates if they can find the open spots near the basket or set up at the 3-point arc waiting for a pass.
McMiller has done a bit of everything this season for the two-time defending Hoop Group Showcase League champions. Playing on an undersized team forced to play the entire season without injured Ciera Toomey, a 6-foot-4 forward who is ranked among the best players in the Class of 2023, NEPA Elite is frequently faced with large disadvantages in height. McMiller helps in that area, battling her way to a team-high 6.7 rebounds per game, before moving back away from the basket on offense.
The scoring outbursts have included a 42-point game that set a record on any age level for the three-year-old program. Despite daringly firing from long distances, McMiller is connecting on 39.5 percent of her 3-pointers while shooting 49.4 percent from the floor overall and 81.0 percent from the line.
McMiller also averages 2.9 assists, 2.2 steals and 1.2 blocks for NEPA Elite.
MORE
See ESPN’s rankings of top players, by skillset:  https://www.espn.com/womens-college-basketball/story/_/id/34157228/women-college-basketball-recruiting-best-scorer-best-leaper-more-superlatives.