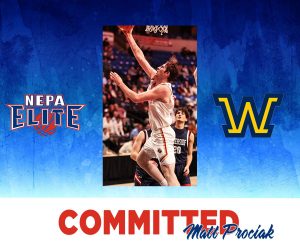 The NEPA Elite Coyle 17U alum decided last week to continue his athletic and academic careers at Wilkes University while playing basketball and majoring in business and marketing. The Holy Redeemer senior has not ruled out the possibility of also trying to play volleyball at some point for the Colonels.

“Finally,” Prociak said of a decision process in which he also seriously considered Lebanon Valley, Misericordia, Susquehanna and DeSales and checked into others. “It took me long enough.

Rebecca Prociak, Matt’s sister, earned All-American honors at King’s College where Mike Prociak also played. Nick Prociak is at Misericordia University where his college career has been slowed to date by injury.

When it came time to choose his local path, Matt was impressed by how much interest Wilkes coach Izzi Metz consistently showed throughout his high school and AAU careers and comfortable with how Metz saw him as a player.

“There were many things,” Matt said. “They were welcoming in the beginning and they really didn’t miss anything. They were at a lot of games … and everything about their campus seemed right. I even went to one of their classes and it seemed right for me.”

A post player who has developed shooting range, Prociak did not like the vision of playing strictly under the basket.

“Wilkes sees me as coming in as a 4 (power forward), playing inside and out, but sooner or later, we want to develop into a 3 (small forward).”

To do that, Prociak knows that after already adding improved shooting to his perimeter game, he will need to improve his ballhandling as well. He also will continue to work on his athleticism and strength, something that boosted his progress during the last few years.

Prociak helped the Royals win WVC Division 2 and District 2 Class 3A titles on the way to a trip to the Pennsylvania Interscholastic Athletic Association Class 3A state semifinals.