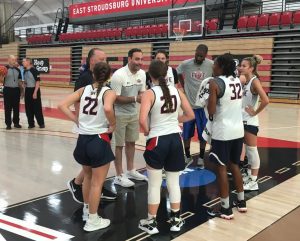 EAST STROUDSBURG – The NEPA Elite Clark 13U team posted two routs while the 17U team put together two impressive comebacks, one of which ultimately fell short, to highlight Saturday’s action for the club’s girls teams at The Hoop Group Pennsylvania Jam Fest on the campus of East Stroudsburg University.

A recap of the Saturday action in which NEPA Elite teams split their 10 games:

Kiyomi McMiller, Ella Wilson and Daniella Ranieli led a comeback as the NEPA Elite Clark 17U girls erased an eight-point deficit over the final 13 minutes to open 2023 Stroudsburg Division Pool C play with a 62-56 victory over XGen Elite 17U HGSL.

The team fell short in its attempt to erase a bigger second-half deficit in the second game, closing from 19 down to within 5 over the final 12 minutes before losing, 77-70, to New Jersey Freedom 17U HGSL.

Ranieli and McMiller were involved in the first run to begin the comeback.

McMiller had closed the first half with a 25-footer at the buzzer.

Emily Romanowski made a steal to set up Ranieli, then came up with a loose ball for another steal that she took coast-to-coast for seven-point streak to a 24-24 tie early in the second half.

NEPA Elite scored the next six points, beginning a 36-22 finish.

McMiller hit a pull-up jumper from the left elbow, Romanowski again found the sprinting Ranieli with a long lead pass and McMiller hit two free throws after being fouled on a breakaway.

XGen Elite fought off that rush and led 39-34 before McMiller, on a step back, and Ella Wilson, off an in-bounds play, hit consecutive 3-pointers to put NEPA Elite ahead.

With McMiller, Ranieli and Wilson producing in the running game, NEPA Elite extended the streak to 11 points and never gave up the lead.

McMiller’s long pass created a two-on-one, which Wilson finished off a Ranieli feed, then Ranieli ran with McMiller to receive a pass for a six-footer from the baseline.

XGen Elite tried to fight back, but Ranieli and Wilson hit 3-pointers to complete NEPA Elite’s 4-for-5 start from long range in the second half.

When XGen Elite got within two points on three occasions, McMiller answered twice and sent a pass over the top to Mackenzie Perluke for another score.

McMiller then went 3-for-4 and Romanowski 2-for-4 at the line in the final 42 seconds to preserve the win.

NEPA Elite started the second half 12-for-19 and shot 50 percent overall after hitting less than 20 percent of its shots in the first half.

Romanowski finished with five steals and Ranieli had three. They shared the team rebound lead with six.

The second game featured a similar attempt to battle from behind.

McMiller, who finished with a game-high 35 points, started the rally with a long 3-pointer and a pull-up jumper from 14 feet. Wilson added a 3-pointer from the corner to make it eight straight points.

Grace Kowalski went 5-for-6 from long range while scoring 26 points for Freedom, which was 9-for-17.

NEPA Elite went 13-for-24 as a team with Perluke making both her attempts while Ranieli and Wilson were going 2-for-3.

Wilson had nine points while Perluke and Romanowski had eight each. Romanowski also had six rebounds to share the team lead with McMiller.

The NEPA Elite Macciocco 16U team bounced back from a loss in its 2024 Stroudsburg Division Pool B opener to defeat New Jersey Freedom 16U HGSL, 56-38.

NEPA Elite mixed a strong running game with the post play of Elyse Montgomery during an extended, game-changing run through the middle of the first half.

New Jersey scored the game’s first four points and was up, 8-7, before Gabby Marsola grabbed a rebound and fed Elizabeth Viglone for a basket.

Sophia Talutto turned a steal into a three-point play, then hit Finley Bittenbender for a 3-pointer after a steal by Montgomery.

That quick eight-point streak made it 15-8.

Finley Bittenbender hit a 3-pointer between two scores by the Freedom to keep lead from ever getting below four.

NEPA Elite then held Freedom without a basket for nearly five minutes while scoring 13 of the next 15 points to complete a 24-7 run.

Montgomery had two strong moves in the lane sandwiched around Talutto scoring from the left side in transition.

Finley Bittenbender made it 3-for-3 from beyond the arc during the run and Talutto scored again on the secondary break before Kennedy Bittenbender connected from in the lane in transition for a 31-15 lead.

New Jersey crept back within 33-21 at halftime, but never got closer than nine points in the second half.

The lead reached its peak when Montgomery hit a left-handed hook in the lane for a 51-32 advantage, capping a team-high 15-point effort.

Montgomery went 6-for-8 from the floor, hit her only 3-point attempt and made two free throws. She also grabbed five rebounds and made four steals.

Talutto and Finley Bittenbender joined her in scoring in double figures and providing other contributions. Talutto was 5-for-7 from the floor and had 13 points, 4 assists, 4 steals and 2 blocked shots. Finley Bittenbender had 11 points, 5 assists and 5 steals.

Viglone had eight points and a team-high seven rebounds.

Talutto had a team-high 13 points and made 3 steals.

The Bittenbenders are from Scranton, Montgomery from Honesdale, Talutto from Dunmore, Viglone from Dallas and Marsola from Wyoming Valley West.

The NEPA Elite Butler 16U team lost twice to finish 1-2 in the 2024 Mountain Division Pool B.

Brenna Hunt had 13 points and 4 steals to lead the team in the first game.

Hunt had a three-point play in the first half and Marsola made a 3-pointer in the second half, but the offense otherwise struggled against LGB Select.

NEPA Elite finished third in the four-team pool leaving it with a consolation game Sunday.

Hunt is from Lake-Lehman, Marsola from Wyoming Valley West, Schrig from Lackawanna Trail and Mildner from Mater Dei Prep in New Monmouth, N.J.

The NEPA Elite Rini 15U team began the day with an 8 a.m. game in which it held off Lehigh Valley Feder 2025 National HGSL late for a 39-38 victory in the 2025 HGSL Poconos Division Pool A.

Isabella Dennebaum led the win with 16 points and 6 rebounds.

The New Jersey Soldiers 15U HGSL then defeated NEPA Elite, 53-29, later in the morning.

Dennebaum and Hillebrand are from Scranton Prep while Smith is from Wallenpaupack.

The NEPA Elite Clark 13U team took two of the first three steps toward winning a 2027 Stroudsburg Division championship.

NEPA Elite won Pool B by routing Hazleton Lady Cougars, 60-22, to finish 2-0 in the three-team pool.

Then, it advanced to the final by pounding New York Royals 2027, 76-20, with a strong all-around game by Valley View’s Cora Castellani leading the way in the semifinal victory.

“For a seventh-grader, the way that Cora understands the game is impressive,” assistant coach Morgan Haefele said. “She plays hard no matter if she misses a shot or makes a turnover. She gets back and creates and controls the game.”

Castellani had plenty of help as the team improved to 3-0 on the weekend with a combined margin of 135 points.

“Overall, they work so hard,” Haefele said after NEPA Elite pulled off its pressure defense by halftime with the game well in hand. “ … You never question if they’re working hard.”