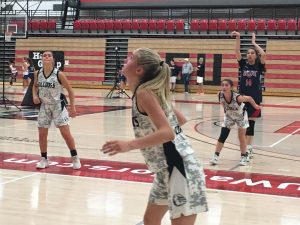 The teams out of Riverfront Sports in Scranton went a combined 5-2 on the day with strong second-half fights late in the two defeats.

While the Clark 13U team won the overall title in its age group, the Clark 17U team won its pool before falling in the semifinals of bracket play.

The teams are back in action Saturday and Sunday at Spooky Nook Sports in Manheim in Select Events Basketball’s Prime Event East.

A recap of the Sunday games:

The NEPA Elite 17U team played from behind all weekend, pulling off two comebacks to win Pool C, but being eliminated in the semifinals of the 2023 Stroudsburg Division when another fell short.

Daniella Raniela scored all six NEPA Elite overtime points in a 65-60 victory over the Staten Island Bulldogs 2023 HGSL team after trailing by 19 points in the first half and 15 points in the second half of the last Pool C game.

The New York Royals 2023 HGSL team knocked NEPA Elite out of the tournament with a 74-60 victory in the semifinals.

Facing a running clock after falling behind by 23 three times, NEPA Elite got within 14 before running out of time.

In Saturday’s first two games of the tournament, NEPA Elite came from eight down in the second half to win one game and got within five in the final minute after trailing by 19 in a loss in the other game.

“I think we were inconsistent in our play, but our fight is tremendous,” coach Kevin Clark said. “The way we were able to play and claw back when we’re down showed us the type of team we can be.

“We just have to be more consistent in being that team all the time and I think the outcome could have been different.

“I’m in no way disappointed about winning our pool and getting to the semifinals against a really good field. We just continue to get better every week.”

Staten Island had won both Saturday games and had the pool lead going into Sunday.

The Bulldogs then opened big leads Sunday with a chance to clinch the pool title.

NEPA Elite nearly pulled out the win in regulation by outscoring Staten Island for an extended stretch of the second half, 26-7.

Cadie Lewis started the turnaround with a 3-pointer, then Kiyomi McMiller scored the next 11 points in a 14-2 run.

Ella Wilson sparked a 12-1 surge with a three-point play, followed by a 3-pointer. After her 3-pointer, the NEPA Elite defense forced a 10-second violation in the backcourt.

McMiller then converted two straight pull-up jumpers in the lane, one for the tie and next for the lead. Ranieli hit an elbow jumper for a 59-55 lead, but the Bulldogs scored the last two baskets of regulation to force overtime.

The tournament used the Elam Ending where the first team to score five points in the untimed overtime was the winner.

Ranieli took over in the race to 64 points, getting NEPA Elite to 65 instead by scoring all six points with defensive help from her teammates.

Wilson blocked a shot on a drive to open overtime and Ranieli came up with the loose rebound, taking it hard the other way to draw a foul and hit two free throws.

Staten Island made one free throw.

Rebounds by Wilson, on defense, and Emily Romanowski, on a loose ball on the offensive end, led to another Ranieli drive and two more free throws.

When Romanowski tracked down a loose rebound on the defensive end, Ranieli anticipated, took off and had a breakaway layup for the clinching points.

“I knew they were going to take a lot of chances,” Ranieli said. “And, as soon as Emily got it, I knew she was going to throw it up the floor.”

Ranieli had 16 points and 3 steals.

Both teams finished 2-1 in the pool, but the head-to-head win gave NEPA Elite the pool title on a tiebreaker.

In the semifinals, the New York Royals used the combination of their running game and a commitment to strong post play from a bigger lineup to outscore NEPA Elite, 30-8, on the fastbreak, 59-33 in the paint and 16-2 on second chances.

McMiller scored 23 points and made 3 steals.

Wilson had a team-high three assists to go along with seven points.

Ranieli is from Pittston Area; McMiller from Trinity Collegiate High in South Carolina; Lewis from Dunmore; Wilson from Lake-Lehman; Romanowski from Western Wayne; and Perluke from Wyoming Valley West.

The NEPA Elite Macciocco 16U team lost its final pool play game in the morning in the 2024 Stroudsburg Division, but came back to win a consolation game in the afternoon and finish 2-2 for the weekend.

Elizabeth Viglone and Sophia Talutto also scored in double figures while leading the team in another statistical category.

Viglone had 12 points and 3 steals. Talutto had 11 points and 5 assists.

Earlier in the day, NEPA Elite cut into the deficit several times, but fell short against Sideline Cancer 16U HGSL, 59-52, in the final game of Pool B.

Finley Bittenbender made four of her five 3-points and scored 14 of her 17 points in the loss. She also led the team in rebounds with five.

Viglone scored all 11 of her points in the first half when she went 6-for-7 from the foul line.

The BIttenbenders are from Scranton; Viglone from Dallas; Talutto from Dunmore; Montgomery from Honesdale; and McDonald from Abington Heights.

Brenna Hunt and Mackenzie Schirg both produced double-doubles as the NEPA Elite Butler 16U team closed with a 47-46 victory over Lehigh Valley Fever 2024 Regional in a 2024 Mountain Division consolation game.

Hunt had 15 points and 10 rebounds, including 5 offensive. Schirg scored 10 points and grabbed 11 rebounds, 6 of them on the offensive end, while also dishing out a team-high 4 assists.

Stephanie Mildner contributed to the strong effort on the boards with six rebounds.

NEPA Elite held off a large surge by Lehigh Valley for the victory.

Hunt is from Lake-Lehman; Schirg from Lackawanna Trail; Marsola from Wyoming Valley West and Mildner from Mater Dei Prep in Middletown, N.J.

The team went 2-2 for the weekend.

The NEPA Elite 15U team used its pressure defense and a 10-0, first-half run to break away from the Long Island Renegades 15U HGSL team for a 56-33 victory in a 2025 HGSL Poconos Division consolation game.

Madeleine Walsh had seven points while Riley Ritterbusch and Ella Smith had six each, Maggie Coleman had five and Isabella Dennebaum had four.

Ritterbusch scored her points on a pair of 3-pointers.

Hillebrand, Ritterbusch and Dennebaum are all from Scranton Prep; Walsh and Coleman are from Abington Heights; O’Shea is from Scranton; and Smith is from Wallenpaupack.

NEPA Elite finished 2-2 for the weekend.

Details on the championship effort by the 13U team can be found at: https://nepaelite.com/2022/06/defense-put-13u-team-in-control-early-in-title-game/.