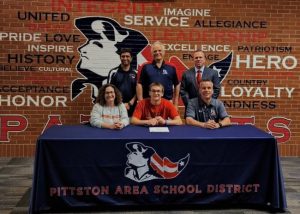 When it came time to choose a college, J.J. Walsh considered the possibility of attending Penn State University of the University of Pittsburgh, options that would have ended his competitive basketball days.

The NEPA Elite Coyle 17U alum and recent Pittston Area graduate ultimately decided to stay close to home and attend King’s College, a decision which also allowed him to extend his basketball career.

Walsh committed last month to the Wilkes-Barre school where he will study mass communications and play on the National Collegiate Athletic Association Division III team.

“This was always a goal of mine.”

Walsh said he began talking to the King’s coaches last summer and they followed his progress throughout his senior year.

At Pittston Area, Walsh made an impact off the bench as a freshman. He was a second-team Wyoming Valley Conference Division 1 all-star choice by NEPABasketball.com as a sophomore, then made the first team each of his past two seasons.

In his senior season, Walsh surpassed 1,000 points for his career, was a second-team, all-District 2 pick by the website and helped Pittston Area win a District 2 title and reach the second round of the Pennsylvania Interscholastic Athletic Association state tournament in Class 5A.