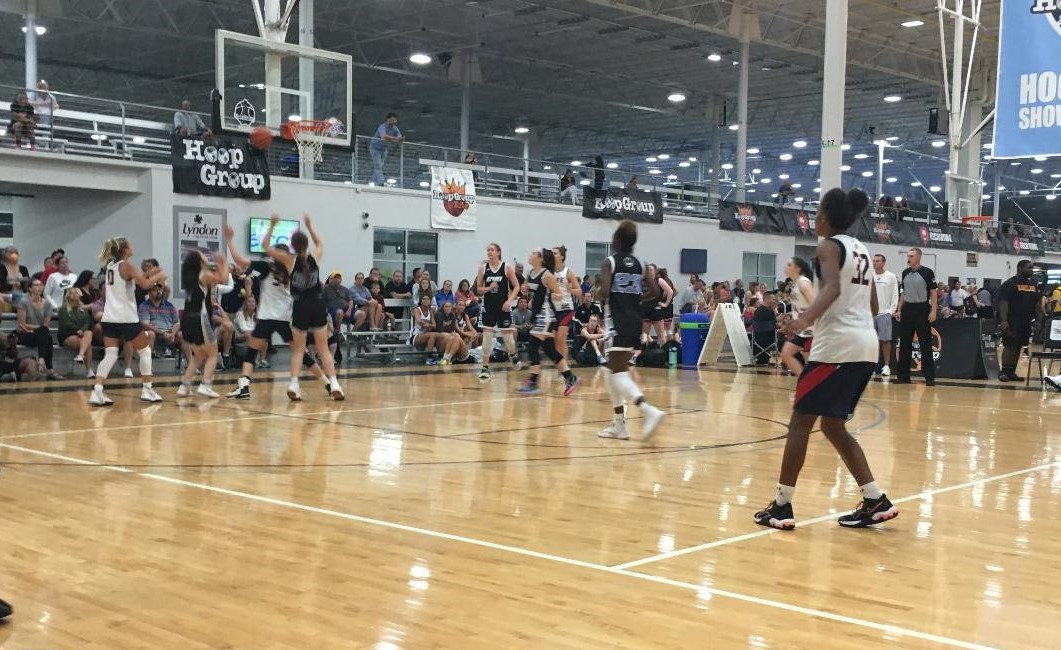 MANHEIM – The NEPA Elite Clark 17U girls team nearly matched its past accomplishments while providing signs of a bright future during The Hoop Group Showcase League Girls Championships Sunday through Tuesday at Spooky Nook Sports.

NEPA Elite, which made its debut at the same time as the Showcase League for girls, followed up winning the first two HSGL titles by making it back to Tuesday’s championship game despite entering the tournament as the 17th seed in a 24-team field.

After a morning semifinal victory over EVO Elite, the NEPA Elite was stopped one win short of a third straight title by United NJ Platinum 2023 HGSL.

Using a lineup with all but one player eligible to be competing in younger age groups, NEPA Elite, which had struggled at times earlier in the season, won four straight in the HGSL 17 Championship bracket – the organization’s highest level of competition – and carried a six-game winning streak into the final.

“When you see 17U, you assume one or two girls underclassmen are playing, but we only have one true 17U player,” Clark said. “To be able to play at the level we’re playing with this group as underclassmen, I think says a lot about the future of where the program is headed.”

With 6-foot-4 North Carolina commit Ciera Toomey, the 2021 HGSL Most Valuable Player, unavailable the entire season because of injury, NEPA Elite faced a height disadvantage, often an extreme one, in nearly every game.

“If you look at it from a perspective on the season, there’s been total growth with this group,” NEPA Elite founder and team head coach Kevin Clark said. “Coming in extremely undersized, they’ve battled. They’ve proved themselves.

“They’ve all had to grow. They’re not used to playing out of position, playing girls bigger and stronger than them, but they always come through.”

A recap of Tuesday’s semifinal and final games:

The point guard from Silver Spring Md., who is listed in ESPN’s HoopGurlz Recruiting Rankings as the No. 7 player in the country in the Class of 2024, went 12-for-25 from the floor and 8-for-9 at the line.

McMiller’s effort was part of NEPA Elite picking up much of its advantage at the free throw line.

Emily Romanowski was 4-for-4 and Mackenzie Perluke was 3-for-4 while Daniella Ranieli, Emily McDonald and Ella Wilson all made both their attempts.

Perluke continued an outstanding tournament with 11 points and 7 rebounds.

Facing a 7½-inch height disadvantage in the low post, Romanowski’s defensive work helped force Division I-offered prospect Anna Foley into a 2-for-8 start and a 6-for-15 day.

Ranieli opened the game with a 3-pointer, then McMiller produced four points in transition for a 7-0 lead less than two minutes in. She made a steal and won a footrace up the floor for a layup, then fed Perluke on the fastbreak.

After EVO Elite’s first basket, Cadie Lewis hit a 3-pointer and McMiller worked inside for the next five points on a three-point play and a pivot in the lane off an in-bounds play to make it 15-2.

EVO Elite worked the ball inside for the game’s next seven points, but Lewis made it 2-for-2 from 3-point range to begin a nine-point streak to a 24-9 lead.

Rebounding factored into the streak. Perluke scored on two putbacks and McMiller grabbed her fifth defensive board of the first eight minutes, then took off upcourt to find Ranieli on the run for another basket.

Facing a team with three 6-footers without a player taller than 5-8 in the starting lineup, NEPA Elite remained within 39-31 of EVO Elite on the boards, including 22-20 in the first half. That allowed NEPA Elite to keep the lead in double figures the rest of the half and reach the break in front, 37-25.

Drives by point guard Sofia Mazzotta led EVO Elite back in the second half when Mazzotta scored 10 of her 14 points.

Ranieli hit a 3-pointer early in the half, then NEPA Elite penetrated for scores when threatened late. McMiller scored four straight points, then Perluke drove for a basket.

Richmond commit Alexandra Sweeney scored 15 points and led the surge that put United NJ in control midway through the first half of Tuesday afternoon’s championship game.

Villanova recruit Brynn McCurry, a 6-1 forward, worked through some early foul trouble to finish with 8 points, 15 rebounds and 2 blocked shots. She grabbed eight offensive rebounds to lead United NJ to a 43-26 advantage on the boards.

McMiller scored 15 of her game-high 21 points in the first half for NEPA Elite. She also had six defensive rebounds and three assists.

Cadie Lewis made all three of her 3-pointers for nine points.

Romanowski had a team-high eight rebounds.

McMiller had the first six points of an eight-point streak that ended with Romanowski’s baseline drive for an 8-2 NEPA Elite lead 3:04 into the game.

Lewis hit two straight 3-pointers off McMiller passes for a 14-9 lead before United NJ took charge of the game.

Sweeney had the first two baskets off a steal and an elbow jumper, then added a 3-pointer during a 19-2 run to a 28-16 lead with 5:52 left in the half. Summerville and Ella Kreuzer, a 2025 shooting guard, had five points each in the run.

NEPA Elite got to within nine late in the half.

United NJ closed the half with a Riley Allen 3-pointer and Lia Manuel putback for a 39-25 lead and never let the advantage slip back into single digits in the second half.

The championship game effort completed a four-game run in which the seventh-seeded United NJ, a team Clark described as “clicking on all cylinders” won its 4 tournament games by a total of 82 points. United NJ rolled into the title game with a 58-26 semifinal rout of New Jersey Freedom 17U HGSL.

Perluke is from Wyoming Valley West, Romanowski from Western Wayne, Ranieli from Pittston Area, Lewis from Dunmore, Wilson from Lake-Lehman and McDonald from Abington Heights.

“I think we came out a little flat in the championship, but I think the fact that we got there with this group showed the resiliency and talent and what they’ve achieved over this summer,” Clark said.

The Clark 13U team played up an age group and won the 14U Platinum Division title. Details: https://nepaelite.com/2022/07/clark-13u-team-tops-older-opponents-for-title/.

Recaps of the finales for the Macciocco 16U and Rini 15U teams: https://nepaelite.com/2022/07/tuesday-recap-rini-team-closes-with-ot-victory/.