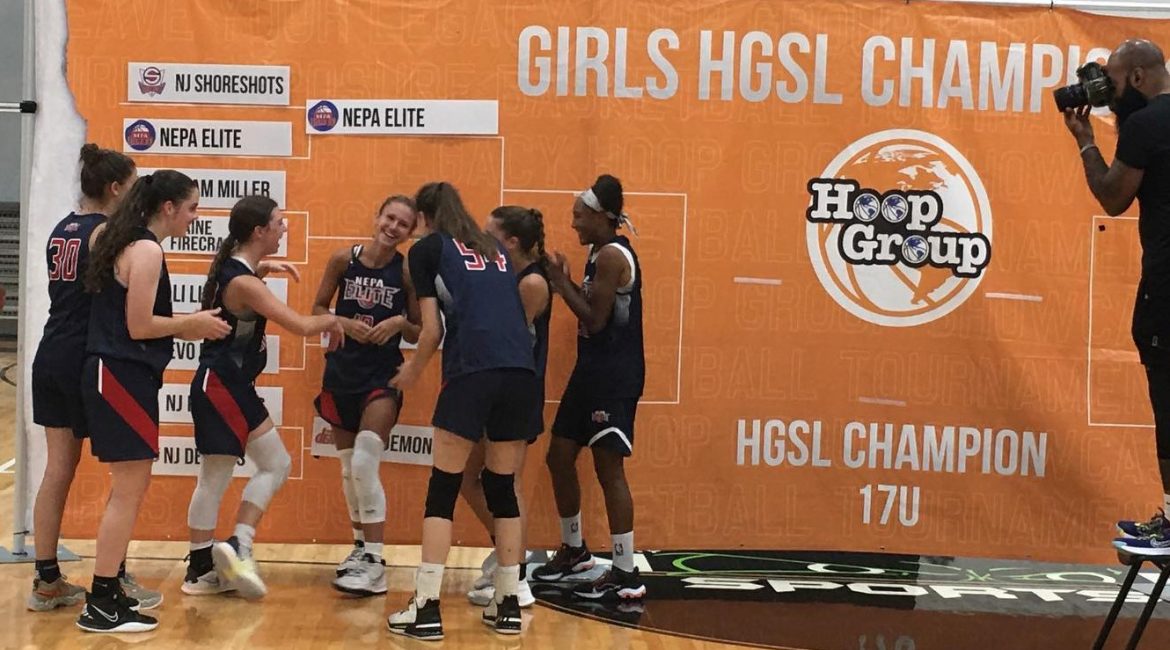 MANHEIM – Kiyomi McMiller was on the way to matching her own club scoring record, but she needed help.

McMiller and Perluke combined for 37 second-half points as the two-time defending Hoop Group Girls Showcase League champion NEPA Elite Clark 17U girls, working their way through as the 17th seed, knocked off the top-seeded New Jersey Shoreshots, 78-68, Monday in a second-round game.

With McMiller and Perluke again sparking the offense and 5-foot-7 Emily Romanowski continuing to lead the undersized squad’s battle on the boards, NEPA Elite followed it up with a stunning, 56-32 rout of No. 8 seed Team Miller-Lightning to land a berth in Tuesday morning’s semifinals.

A closer look at the two games:

McMiller scored 22 of her 41 points and Perluke scored 15 of her 17 in the second half as NEPA Elite continued its late-season surge by beating a team it lost to twice earlier this season.

New Jersey Shoreshots came to Scranton and defeated NEPA Elite, 64-47, on its home court at Riverfront Sports in the season-opening event during the first weekend of April. The teams met again nearly three weeks later with Shoreshots winning, 52-48.

After falling behind with less than five minutes remaining, NEPA Elite outscored Shoreshots, 20-9, with the help of nine points each by McMiller and Perluke.

Seconds after the Shoreshots took their last lead on a 3-pointer by Emma Carman, McMiller brought the ball up court and drained a 24-footer for a 61-59 lead.

McMiller made her last five shots from inside the arc and her last four shots from 3-point range. She finished 16-for-29 from the floor, 6-for-8 on 3-pointers and 3-for-5 on free throws.

“Kiyomi’s an awesome player and it’s awesome to play with her,” said Perluke, who had taken just one first-half shot. “When I’m down on myself, I just try to do other things to help and that kind of gets my game going.

“Defensively and offensively, I just tried to be more aggressive overall and that definitely impacted how the first game went.”

Perluke joined in by taking hits, drawing the fouls that led to her making her first nine free throws of the second half and scoring the nine points in the final 3:06. She had one of the game’s biggest baskets with a tough turnaround shot in the lane over bigger opponents for a 69-63 lead with 2:25 left.

Between hitting both ends of one-and-ones with 29.4 and 18.6 second left to stretch the lead from five to nine points, Perluke went up into a crowd and pulled down a rebound that had been tipped several times. She also came up with a steal in the final minute, matching up physically despite arguably having the appearance as one of the least imposing players on the floor.

“Coming into AAU season, there’s a lot of bigger girls on the 17U teams,” said Perluke, who like five of her six teammates on the semifinalists is eligible to be playing in a lower age group. “I’ve definitely learned this season how to be more physical as a player and it’s definitely helping my game overall.”

Romanowski helped offset some of that work by matching McMiller for the team lead of seven rebounds.

Perluke, Romanowski, McMiller and Daniella Ranieli each had two steals.

While McMiller was lighting up the scoreboard, Breanna Delaney tried to match for Shoreshots with 19 points in the second half and 24 in the game.

The bandage on McMiller’s shoulder and upper arm and the puffiness of Perluke’s upper lip gave a hint of how rough Monday afternoon’s quarterfinal was at times.

McMiller and Perluke led a more balanced effort, however, in making sure NEPA Elite never had a tough time on the scoreboard.

While McMiller scored a team-high 17 points, her teammates combined to shoot 50 percent from the floor with Perluke adding 14 points and 4 others scoring either 5 or 6.

The same two players were at the forefront of the offense, but six players scored during a 22-6 advantage over the final 2:48 of the first half and first 4:15 of the second half to build the lead to 43-21.

McMiller had eight points in the run and Perluke scored three straight baskets in a span of 1:06 early in the second half.

NEPA Elite pushed the lead as high as 54-25 behind a defensive effort that induced Team Miller to miss its first 11 shots from beyond the arc and start 3-for-21 overall in the second half.

McMiller had a team-high four assists.

Gissel Gamble led Team Miller with 12 points, but she was held in check after scoring the team’s first eight in in 4:06.

The Lightning led for much as the first seven minutes before an 11-0 run put NEPA Elite ahead to stay, 18-10. McMiller had two baskets and Ranieli had the go-ahead 3-pointer during the run.

McMiller is from Silver Spring, Md. Perluke is from Wyoming Valley West, Romanowski from Western Wayne, Ranieli from Pittston Area, Wilson from Lake-Lehman, Lewis from Dunmore and McDonald from Abington Heights.

The three wins over the first two days advanced NEPA Elite into Tuesday’s 9:40 a.m. semifinal against EVO Elite 17U HGSL, the 20th seed in the 24-team field. Seventh-seeded United NJ Platinum HGSL and third-seeded New Jersey Freedom 17U play in the other semifinal at the same time on an adjacent court.