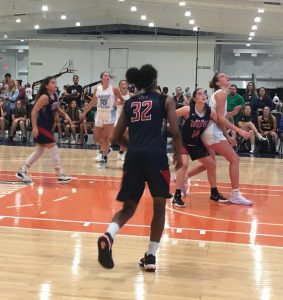 UNCASVILLE, Conn. – In a game featuring seven double-figures scorers, including teammates who provided 38 points and a final-minute, game-winning, three-point play, Romanowski found her own ways to stand out while not making a basket.

Romanowski continued her recent rebounding and post defensive work Thursday morning while leading the NEPA Elite Clark 17U girls to their toughest of three straight wins so far at The Hoop Group Girls Live in New England tournament at Mohegan Sun Casino.

Kiyomi McMiller scored 38 points and Ella Wilson converted a rebound into the decisive play with 31.6 seconds left in a 75-72 victory over Maine Attraction HS National in the second round of the 17U Orange Division Championship bracket.

All Romanowski did – while getting her only two points on a pair of free throws – was grab a team-high 13 rebounds and provide the most important defensive effort in a game full of dynamic offensive play. Eight of those rebounds came in a second-half rally from nine points down and Romanowski came up with four blocked shots and two steals, but it was the numbers that she prevented that mattered most.

The 5-foot-7 Romanowski had virtually no experience as a post defender before this summer when the undersized NEPA Elite team found itself in need of some additional toughness on defense and on the boards against bigger opponents.

Romanowski’s work against post players well over six feet tall has stood out in the past two weeks.

It was needed in the first of the team’s two Thursday wins.

Lizzy Gruber, a 6-foot-4, Maine all-state high school player with multiple National Collegiate Athletic Association Division I offers, including one from Providence, had tormented NEPA Elite throughout the first half with 14 points, 15 rebounds and 3 blocked shots.

It was time for a Romanowski reassignment and the rising Western Wayne junior responded.

“I tried to keep in front of her and know that my teammates were behind me to help me out,” Romanowski said. “I just had to be strong.”

Romanowski said she sees “defense and hustle” as her roles on the team.

There were plenty of scorers available in the game.

McMiller had 19 points in each half. She made six of her last seven shots while scoring 13 points in the final 7 minutes. When she wasn’t scoring, McMiller was providing eight rebounds and a team-high five assists.

When that combination was unable to break a tie in the final minute, Wilson was there for the rebound. The winning three-point play finished off her 11-point, 6-rebound, 2-block performance.

Sophia Talutto went 3-for-4 while adding six points in the second half for NEPA Elite, which trailed 46-37 when Addison Sulikowski’s back-court steal set up Gruber’s only second-half basket and 49-40 after the teams traded 3-pointers.

Talutto’s 19-footer off a Romanowski offensive rebound and feed made it 52-52 for the first tie since 10-10.

Maine Attraction, which has won its other 2 games at the event by a total of 52 points, was not done. It scored the next seven points for the first of six late lead changes.

Sierra Carson hit four 3-pointers while finishing with a team-high 21 points. Elise MacNair’s strong drives to the basket allowed her to join Gruber with 17 points. Sulikowski chipped in 10.

Perluke had a team-high 17 points in the afternoon game as NEPA Elite once again handed a Maine opponent its only defeat of the event’s first two days.

Wilson led the team with eight rebounds and 2 blocked shots while Cadie Lewis led in steals with 3.

Perluke did not miss a shot while scoring 12 points in the first 8:30. She had four of the points and Talutto provided the other two in a six-point streak to a 19-14 lead midway through the first half.

The six-point streak started a run that blossomed into 22-2.

NEPA Elite scored the last 10 points of the half. Romanowski scored on a putback, then a 3-pointer late in the half, which Wilson closed with another 3-pointer.

McMiller then kept the lead at a comfortable level by going 4-for-5 from the floor over the first 7:34 of the half.

Lewis and Talutto are from Dunmore. McMiller is from Silver Spring, Md. Perluke is from Wyoming Valley West and Wilson from Lake-Lehman.

The Gemz defeated NEPA Elite, 55-52, at Spooky Nook July 7, but NEPA Elite has won 9 of 10 since with the only loss coming in the Hoop Group Showcase League championship game.

Lehigh Valley Fever 2023 National HGSL and New Jersey Shoreshots 17U HGSL meet in the other semifinal. The two losers play for third place.