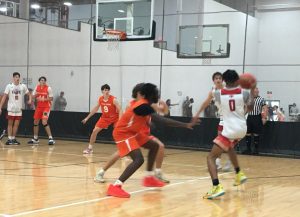 MANHEIM – Three months earlier, the NEPA Elite Cooper 17U boys AAU team made its debut on a different Spooky Nook court against the same team that provided the opposition for Sunday’s season finale.

Hoop Roots provided a perfect measuring stick for just how far the Cooper team progressed in its first season.

Fighting back from a 16-point halftime deficit, NEPA Elite forced a late tie before falling, 55-52, in the championship game of the 17U Poconos Division at The Hoop Group Summer Jam Fest.

There were not any comebacks and there were no division championship battles in the beginning, three months and one day earlier, to be exact.

Hoop Roots had spoiled the team’s debut, 75-46, during the Spring Jam Fest.

“Our first game was against Hoop Roots and we got killed,” coach Brad Cooper said. “ … Our team changed a little bit since then, … but the improvement from April 9th to today was remarkable.

“These guys, when they go to their school teams, are going to come back a little bit different. I think they all improved and I’m really looking forward to seeing them play this upcoming year.”

Hoop Roots, however, again controlled the early stages of the game, opening its double-figures lead.

“It’s all about mindset,” Cooper said. “Coach (Brian) Coyle has us really prepared in practice. We get after it in practice.

“We don’t really have a whole lot of time to have a poor-me mindset. We just focus on the next play.”

With Eli Yusavage and Brycen Martin heating up from beyond the 3-point arc, NEPA Elite fought back in the second half.

“We just wanted to break the game down to little four-minute games,” Cooper said. “Next thing you know, it’s a tie game and we get a stop with I think it was a minute, 24.”

NEPA Elite missed its shot at a lead late and the tie carried into the final minute.

NEPA Elite was forced to foul and needed to do so repeatedly just to get Hoops Roots to the line where it twice hit the front end of a one-and-one in the final 7.2 seconds.

Hoop Routs also kept NEPA Elite from scoring because it had multiple fouls to give in the final minute and used them to foul before a shot could be attempted.

Yusavage nailed a 40-footer on the move at the buzzer. The shot cut into the final margin, but came too late for NEPA Elite to have another chance.

Martin is from Scranton Prep and Fedor from Abington Heights. Yusavage, who filled in with the team on the final day, is from Valley View.

A recap of the remainder of the program’s final day of the boys season:

York Ballers rallied from a 11-point halftime deficit to defeat NEPA Elite Coyle 17U, 59-58, in a 17U HGSL 2 Division consolation bracket game.

NEPA Elite had nine of its dozen 3-pointers during the first half to take a 37-26 lead.

Ben Chilson made his three 3-pointers in the first half and wound up sharing the team lead in a balanced scoring effort. Chilson and Danny Nemitz had 10 points each.

Nemitz, Yusavage and Zach Perta each made two 3-pointers. Yusavage had eight points and Perta six.

Gabe Gonzales, one of seven players who made at least one 3-pointer, had nine points.

Chilson is from Tunkhannock, Nemitz from Mid Valley, Perta from Holy Redeemer and Gonzales from Holy Cross.

The NEPA Elite 16U team had its final game canceled.