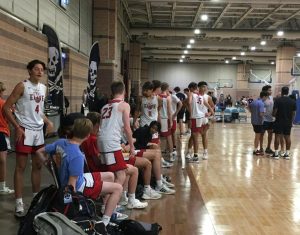 ATLANTIC CITY, N.J. – The NEPA Elite Cooper boys team put on a display of modern basketball Wednesday to open its appearance in The Hoop Group Atlantic City Jam Fest at the Convention Center.

NEPA Elite got 69 of its points from either inside the paint or outside the arc while pummeling Hoop Life, 75-28, in a 17U Division Casino bracket first-round game.

The Cooper team got it started by creating many easy baskets while outscoring Hoop Life, 48-16, in the paint.

Most of those points were not only inside, but layups.

NEPA Elite grabbed 9 of the game’s first 11 rebounds and scored its first 4 baskets on layups while starting out 8-2.

“We’re executing our stuff,” coach Brad Cooper said. “It’s nice to be able to practice twice a week at a facility like Riverfront and be able to be familiar with our offense.

“A lot of AAU teams don’t have that type of situation.”

The team has won six of its last seven games after losing just once in last weekend’s trip to East Stroudsburg University for the Pennsylvania Warm Up.

“It’s been a long summer, we’re here in AC and this is what we’ve been working for,” Cooper said.

NEPA Elite advanced into Thursday’s second round with the help of a 21-4 lead in transition points, a 13-4 advantage in points off steals and a 19-2 lead in second-chance points.

Joe Macciocco got the offense going. His feeds set up layups by Mason Fedor and Dane Schutter to quickly put NEPA Elite ahead to stay after Hoop Life scored the game’s first basket.

Macciocco then made his first four shots, two of them 3-pointers, for 10 points while the team was opening a 35-12 lead with three minutes left in the half. He finished 7-for-8 from the floor, making all three 3-point attempts while scoring 17 points, grabbing 6 rebounds, dishing out 4 assists and making 2 steals.

Fedor and Schutter led the 47-23 board dominance while each posting double-doubles. Fedor had 9 and Schutter 5 of the team’s 20 offensive rebounds.

Both had strong all-around games.

Robby Lucas went 3-for-3 while scoring seven points. James Pettinato made two 3-pointers to finish with six points while dishing out four assists and making two steals. Brycen Martin led the team in steals with three.

Fedor, Walsh and Lucas are from Abington Heights. Pettinato and Martin are from Scranton Prep. Macciocco is from Old Forge and Schutter from Wyoming Area. Nicholls, formerly from Holy Cross, now lives in North Carolina.

The three-day event continues through Friday.

A look at the results of other NEPA Elite teams in the boys event:

The NEPA Elite Coyle 17U team won a Hoop Group Showcase League game, 75-65, over 6th Boro Hoops, then moved into the start of 17U HGSL Championship bracket play where it defeated United NJ 2023, 60-42.

Team Push Basketball HGSL handled NEPA Elite Joyce 16U, 52-24, in a first-round game in the 16U HGSL Championship bracket.

Jalik Nicholls and Brycen Martin scored seven points each in the loss.

Nicholas Williams had four points and a team-high six rebounds.

Gene Curtin and Charlie O’Malley each had two assists; Nicholls had two steals and David Popson had two blocked shots to lead the team in those categories.

Williams is from Dallas, Curtin from Abington Heights, O’Malley from Holy Cross and Popson from Hanover Area.

The Nassau Pride knocked NEPA Elite out of the 15U HGSL Championship bracket with a 62-36 victory.

James Pappas, who had four assists, and Eryan Silva scored seven points each.

Matrone and Pappas are from Scranton Prep. Silva is from Pocono Mountain West.

Return to this website for a separate story on how the NEPA Elite Coyle 17U team won twice Wednesday.