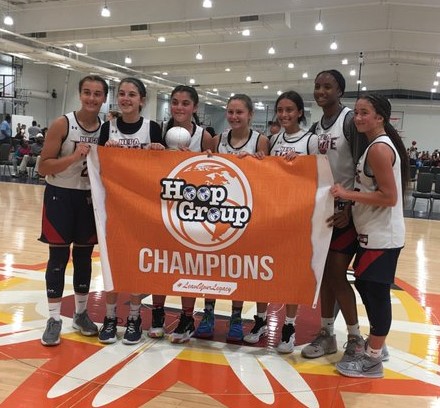 UNCASVILLE, Conn. – Kevin Clark had a decision to make as he watched a group of talented sixth graders from an AAU club team out of Riverfront Sports pummel a series of overmatched opponents while winning multiple titles in the spring and summer of 2021.

The Riverfront co-owner was also the founder of the NEPA Elite, an immediately successful AAU program, playing in higher-level events, but in its second year, fielding strictly high school teams.

As the season wound down, Clark decided the young players needed stronger competition and it was time to stretch the boundaries of NEPA Elite to include one team of players still attending middle or intermediate schools.

A year later, Clark has plenty of reasons to be pleased with the results of the decision.

Since trading in their NEPA Flames uniforms for those of the NEPA Elite and venturing out on the road more frequently, the club’s 13U team has gone 39-5. In 10 events, the NEPA Elite Clark 13U girls team has won its pool all but once. In the six times pool play was followed by bracket competition for overall titles among larger groups of teams, NEPA Elite has gone on to win the bracket four times.

“Them getting on our high school schedule was important,” said Clark, who also coaches the 17U team, which he has guided to Hoop Group Showcase League championship game appearances in all three seasons, including two which produced titles. “I loved working with them.

“They all grew throughout the season, individually and as a team.”

The last two of those titles for the 2022 season came while playing against older teams in 14U divisions at The Hoop Group’s Summer Jam Fest at Spooky Nook Sports July 10-12, then again at the Live in New England event Wednesday through Friday’s season finale at Mohegan Sun Casino Resort.

The team ended the season on an eight-game winning streak, all against older teams, beating seven 14U opponents by an average of 19.3 points in The Hoop Group events and adding a 58-44 exhibition win over the New Hampshire Spartans 15U team Wednesday while in Connecticut for the Live in New England.

“Playing them up a division the last two weekends I think solidified the fact that this group can be a very special group with the way they play together,” Clark said.

NEPA Elite features three players from Valley View, Cora Castellani and Ava Fenton as well as Eva Kaszuba, who was not with the team at the New England event.

There are also two players each from Scranton and North Pocono. Chrissy Jacklinski and Zya Small are the Scranton players while Ella Clementoni and Kayli McHugh are from North Pocono.

Emma Coleman from Abington Heights completed the eight-player roster during the 2022 season.

Wyoming Valley West’s Ella Stambaugh made the team at tryouts, but wound up missing the season because of injury.

Jamie McHugh and Morgan Haefele assisted Clark in coaching the team. Mike Fenton was also part of the coaching staff during the first half of the season.

After making the semifinals through a 3-0 performance in pool play Wednesday and Thursday, NEPA Elite picked up a forfeit in the semifinals of the eight-team field for the Live in New England 14U Orange Division.

The recap of the championship game follows:

Jacklinski scored 18 points, grabbed 9 rebounds, made 3 steals and led NEPA Elite through a lengthy stretch of dominance that turned what had been competitive battles with Team Jersey Elite into a championship game blowout.

“Chrissy, after struggling a little bit (Thursday), had a great game,” Clark said. “She’s a real force to be reckoned with.

“She has moments where she separates herself and she could become a very special player.”

NEPA Elite had been tied at halftime before beating Team Jersey Elite, 51-47, a day earlier in pool play and was trailing, 12-9, less than five minutes into a frantically played game dictated by two high-pressure defenses.

“Energy was very high in the championship game,” Clark said. “Our girls were ready to play.”

Jacklinski got boosts from Small, Fenton and Clementoni while NEPA Elite was outscoring Team Jersey, 34-8, over the last 11:15 of the first half and first 2:15 of the second half.

First, NEPA Elite ran off 11 points in a row to take the lead for good. Then, after trading baskets for six minutes, NEPA Elite blew the game open with 15 straight points.

Small got it started by scoring in the lane off a Clementoni feed to cut the deficit to 12-11 with 11:15 left in the half.

NEPA Elite was off and running less than 40 seconds later.

Small found Jacklinski for a 3-pointer, then Clementoni stole the in-bounds pass and fed Small to make it five points in less than four seconds.

Small and Clementoni each converted rebounds for baskets and a 20-12 lead.

Team Jersey stayed within 28-20 before going six minutes without scoring as NEPA Elite ran away.

Clementoni ignited the second streak with a three-point play, then assisted on the last seven points of the half. She fed Fenton after a steal, kicked an offensive rebound out to Castellani for a 3-pointer and found Fenton cutting to the basket for a 38-20 halftime lead.

Jacklinski finished off Team Jersey early in the second half. She made a steal, went the length of the floor, bounced off two hits and finished the layup, then buried a 3-pointer from the left corner to make it 43-20.

NEPA Elite, which had turned the ball over on four of its first five possessions to start the game, forced Team Jersey into five turnovers before its first shot of the second half.

The wild game featured 59 turnovers, including 31 by NEPA Elite.

“The pace of the game was I think what we expected with the pressure,” Clark said. “I think we did a good job passing out of the traps before they came.

“We had a tough battle with them Thursday, so I think we knew what to expect and our girls responded.”

NEPA Elite more than made up for the high turnover number by crushing Team Jersey on the boards, 35-14, and hitting more than half its shots both from beyond the arc and overall.

Castellani had four steals while Jacklinski, Fenton, Small and Coleman all had three.

Fenton made all five of her field goal attempts while scoring 10 points.

Return to this website for more season wrap-ups for the NEPA Elite girls teams from their final event Wednesday through Friday in Connecticut.