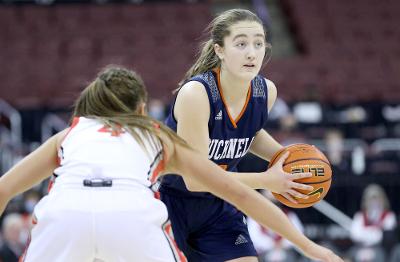 Pictured: Cecelia Collins in a file photo from last season at Bucknell.

Both are sophomore guards.

Collins played all 45 minutes as Bucknell won at Cornell, 65-58, in overtime for its first win in 4 games this season. She scored 8 of her game-high 22 points during overtime and also had 7 rebounds and 5 assists.

“Rachael was fantastic,” coach Jimmy Garrity said, according to a recap posted on the Wofford athletic website.

Kylie Lavelle, another former NEPA Elite Clark team member, also scored in double figures in a Drexel win. The Riverside graduate, who had 11 points, has done so in each game of a 2-1 start.

It was a big day all around for players who have come through AAU programs at Riverfront Sports in Scranton.

Leo O’Boyle, a Scranton Prep graduate on the Lafayette men’s team, also scored in double figures in a victory.

Ethan Meuser, an NEPA Elite Coyle 17U team alum from Wyoming Seminary, provided 5 points in 12 minutes of a Stonehill win over Holy Cross.

Victoria Toomey from Dunmore scored in double figures for Rider during a loss in Ireland.