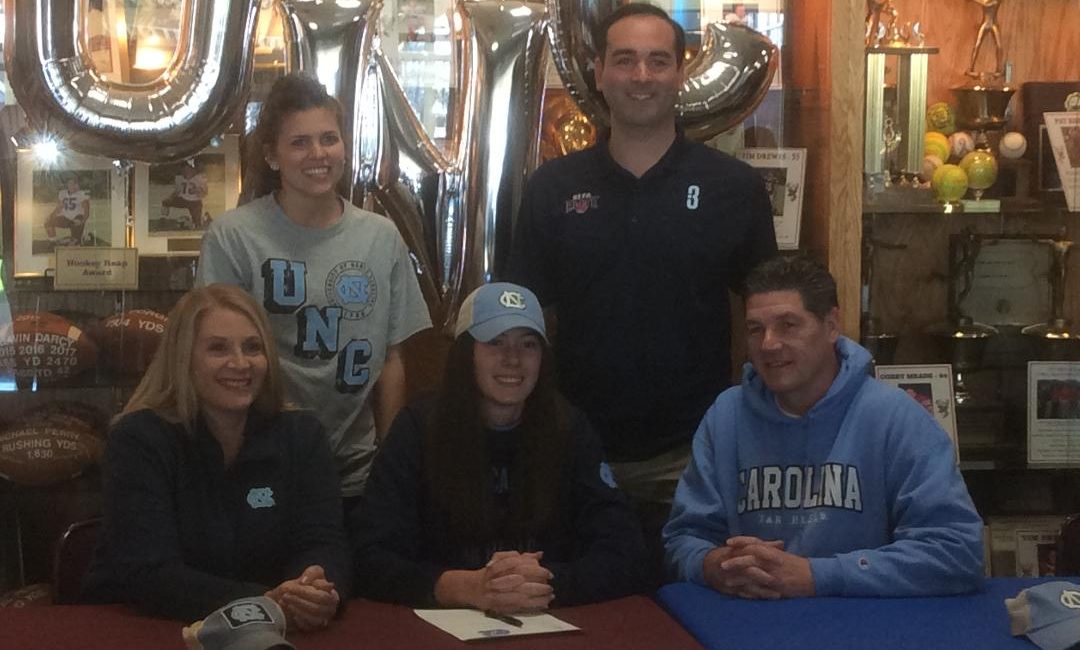 DUNMORE – Ciera Toomey took another step Wednesday on the path that leads to her college basketball career at the University of North Carolina and she had many of her biggest supporters there to share in the moment.

Toomey, who gave a verbal commitment in April, signed her National Collegiate Athletic Association Division I Letter of Intent to receive a basketball scholarship from the Tar Heels.

The 6-foot-4 senior, a three-time, all-state selection at Dunmore, is working her way back for reconstructive knee surgery after suffering a torn anterior cruciate ligament in last season’s District 2 Class 4A championship game.

“I didn’t realize how soon it was going to be,” Toomey said of the Signing Period in which players are able to make their commitments official, “but when my parents told me, it was a nice little distraction, just planning for it, figuring it out with UNC.”

With her parents, Pat and Carrie, on each side at a table in the lobby outside the Dunmore gym, Toomey signed her papers. She then posed for dozens of pictures with those there to help her mark the occasion.

Toomey was named Hoop Group Showcase League Most Valuable Player in 2021 after leading the NEPA Elite Clark 17U team to its second straight HGSL title. Clark continues working with Toomey in her one-on-one basketball training sessions.

Sheehan, a former all-star at Dunmore and the University of Scranton, is working with Toomey on the strength training portion of her comeback from injury.

When Toomey planned the event, she knew she wanted them included.

“Definitely having my teammates beside me, obviously my family and then Kevin and Emily,” Toomey said. “They’ve been a huge part of why I’m here today, so I wanted to make sure they could be here.”

Teammates were also important to include, according to Toomey.

“My teammates, it’s great for them to be beside me,” she said, “but I don’t think they realize how much of an impact they’ve made on why I’m here.”

For more on Ciera Toomey’s college signing, and her earlier commitment, visit the coverage at: Toomey signs Letter of Intent – NEPA Sports Nation.