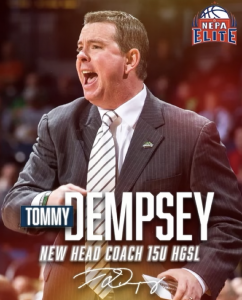 By Tom Robinson, NEPAElite.com
Tommy Dempsey lived his coaching dream and now the veteran of 16 seasons as a National Collegiate Athletic Association Division I head coach is ready to share his experience with aspiring players and coaches.

Dempsey is returning to Lackawanna County to serve as coach of the NEPA Elite 15U boys team out of Riverfront Sports in Scranton during the spring and summer of 2023.

The Dunmore High School graduate and former Lackawanna College and Susquehanna University athlete led three different college basketball programs to their highest win total in school history. Dempsey coached at Wyoming Seminary, Keystone College, Lackawanna College, Rider University and Binghamton University, making it to Rider at 30 as one of the youngest Division I head coaches in the country.

“Being able to be a Division I head coach for 16 years and being involved in college basketball for 20-plus years, I think I have a lot to offer the players in the program and maybe even from a mentorship role to some of the younger, aspiring coaches,” Dempsey said. “Because I was able to kind of live my dream, so to speak, there’s a part of me that thinks I owe it to now be a connector in not only the development of young players, but also maybe to connect some aspiring coaches.

“I just hope to use my experiences from 24 years of coaching to give back and kind of help the next group of players and coaches that are coming through.”

After Binghamton decided not to renew Dempsey’s contract in March, 2021, he gradually came to the decision not to pursue more coaching roles on the major college level. That process that would have likely meant stepping back to an assistant’s level and/or relocating his family, possibly multiple times.

Dempsey instead enjoyed coaching the fifth- and sixth-grade team of Tyler, the youngest of his four children, in the winter and summer seasons.

Coaching the NEPA Elite 15U team likely will mean a chance to coach his 15-year-old son Brian in the upcoming AAU season.

“A big part of this for me is just trying to be able to coach my younger two kids a little bit and be more and more involved in the things they have going on,” Dempsey said. “I have two older children that were athletes and I really missed a lot.

“You get so caught up in everything you have going on with your team and your programs over the years and I always had a certain level of guilt that accompanied that, but it was just part of the job, it becomes a struggle to balance being a Division I coach. I was blessed. I coached their whole lives and I was fortunate to be a Division I head coach at 30, but a good portion of their childhood was being sons and a daughter of a Division I coach.”

Tommy Dempsey, coach Dempsey’s oldest son, played one season as a walk-on at Providence College after playing for the JB Hoops AAU team out of Riverfront. He then played another season on his father’s final Binghamton team during the COVID-shortened 2020-21 season. Following those two seasons, he has started his own coaching career on the junior varsity level at his alma mater, Seton Catholic Central High School in Binghamton.

The former Binghamton coach still lives with his family in Binghamton, but is now commuting, working in the business insurance industry at Harding Brooks Insurance out of its new Scranton office. His second oldest child, Emily, also played high school basketball at Seton Catholic.

While Dempsey does not miss certain aspects of the business side of being a college basketball coach, he does miss other parts of coaching. The youth and AAU opportunities help fill that void.

“I miss coaching at the purest form,” Dempsey said. “ … With all my experiences in the game, you coach so many games and you work with so many players and you learn so much from colleagues and other coaches in the profession. You just have access to this world of basketball that’s on kind of a different level.

“You accumulate all this knowledge of the game and, when you take another job, you feel like you have all this knowledge in your head, but you’re not really sharing it with anybody. So, what good are you doing, if you have 24 years of experiences, but you have nobody to share it with.

“As you go through periods of reflection that has been something that, while not coaching, has weighed on me.”
NEPA Elite and the programs at Riverfront Sports offered the perfect fit for this time in Dempsey’s life.

“My own son played there and it just seemed to me to be the time to come back and get involved,” he said.